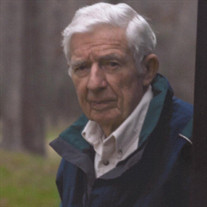 Winton Leonard Studt passed in his sleep on June 15, 2021. A memorial celebration of his life is scheduled for 11 am, Saturday, July 3rd at the First Presbyterian Church with Rev. Kendall Land officiating. Visitation will follow the memorial service in the church’s gathering area. Winton was born near Kansas City, Kansas on November 20, 1923. He grew up on the family farm and graduated from Wynndotte High School in Kansas City. After a year of junior college, he enlisted as a Naval Cadet. Upon completion of his flight training, he transferred to the US Marine Corp and served his country as a dive bomber pilot in the South Pacific (Midway). He was discharged in 1946. Following his military service, he attended the University of Kansas where he ran track and received his Bachelor of Science degree in chemical engineering. While there he met his future wife, Virginia. After graduation in 1949 he was employed by Tennessee Eastman in Kingsport, Tennessee. He and Virginia married while in Kingsport, Tennessee. In early 1951, they moved to Longview where he was one of the early chemical engineers at Texas Eastman Company. At Texas Eastman, he became superintendent of materials handling, pipelines, and salt dome storage. He retired in 1986. Winton was a member of the First Presbyterian Church where he served as a deacon, elder, and trustee. He was also a member of the Longview Lions Club for over 50 years. At various times during the years, he enjoyed gardening, tennis, golf, teaching Sunday School, and coaching church basketball. Winton was a devoted family man and friend. He was preceded in death by his wife, he parents, Alvin Winton and Sophie Caroline (Frederick) Studt; and his sisters, Ruth Studt Grueninger and Winona Studt Packard. He is survived by his sister Irene Kyle of Columbia Falls, Montana; daughter and son-in-law, Joyce and Bob Moomau of Longview, son Bradley Studt of Lake Cherokee, and son and daughter-in-law Jim and Mary Studt of San Angelo; and grandchildren James Barnhill, Jenna Moomau, Anna Studt, Andrew Studt, and Camille Studt Carpenter. The family thanks the loving care he received at Buckner Westminster Place. In lieu of flowers, donations may be made to First Presbyterian Church, 301 N. Center St, Longview, Texas, 75601, or a charity of your choice.

Winton Leonard Studt passed in his sleep on June 15, 2021. A memorial celebration of his life is scheduled for 11 am, Saturday, July 3rd at the First Presbyterian Church with Rev. Kendall Land officiating. Visitation will follow the memorial... View Obituary & Service Information

The family of Winton L. Studt created this Life Tributes page to make it easy to share your memories.

Send flowers to the Studt family.