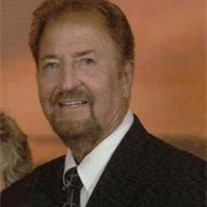 Wilmer Cox passed away Saturday, February 13, 2010 at Beacon Hospice at Margaret's House after a three year battle with cancer. Born May 29, 1938 in Clarendon, Texas, son of the late Kirk Sirenous and Irene Adair Cox. Wilmer grew up in Houston, playing basketball at Milby High School, where he averaged 14 points per game. In 1956, his senior year, he won the Jack Conrad Award, symbolic of outstanding sportsmanship for his athletic and academic achievements in the greater Houston area. He went to Kilgore Junior College to play for Coach Joe Turner on a full basketball scholarship. In 1958 his team went on to win the NJCAA National Championship. The 1958 team was inducted into the Kilgore College Hall of Fame in 2003. Cox was inducted into the Hall of Fame as an individual in 2009. He was a graduate of Texas A & M where he also attended on a full basketball scholarship. He loved bragging about being on the A & M basketball team that beat the University of Texas 79 to 23. He was inducted into the Aggie Hall of Fame in 2002. After graduating from A & M with a business degree, Cox spent several years in the oil field business. He then received his Masters Degree from Pivit Point College of Cosmetology in Chicago and established "Talk of the Town Hair Salon" in 1970. He also held a management position with R & K Distributors of Longview before retiring in 2005. He served on the Texas State Cosmetology Board for 4 years, appointed by then Governor Dolph Briscoe. He served on the Lake Cherokee Water Company Board for over 10 years. Cox was resident of Lake Cherokee for over 40 years. Since 1960 he was a member of both the Texas A & M Lettermen's Association and a Century Club Member of the Association of former students. He was a member of Trinity Episcopal Church. Survived by his wife Peggy Tucker Gatlin of Lake Cherokee, daughter: Neidra Rogers and husband Randy of Mooresville, NC., Renee Cox of Longview, Kaydee Kesterson of Dallas, Alexandra Rose Cox of Longview and son Ryan Kirkpatrick Cox of Longview, grandchildren: Amanda, Kelli, and Kevin Rogers, Brittany Brown and Kennedy Kesterson, also devoted friends Sharon Little and Jimmy Stevens. In the uniqueness of who the man was, at Wilmer's request no funeral service or memorial will be held. Wilmer requested that in lieu of a service, all his friends and relatives perform a random act of kindness for someone in need, in his memory. The family requested that in lieu of flowers memorials be made to Trinity School of Texas, 215 Teague Street, Longview, Texas 75605.

Wilmer Cox passed away Saturday, February 13, 2010 at Beacon Hospice at Margaret's House after a three year battle with cancer. Born May 29, 1938 in Clarendon, Texas, son of the late Kirk Sirenous and Irene Adair Cox. Wilmer grew up in Houston,... View Obituary & Service Information

The family of Wilmer Dee Cox created this Life Tributes page to make it easy to share your memories.