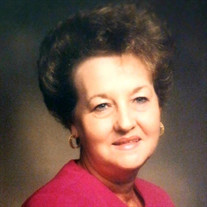 Memorial Services for Wilma Faye Boyd, 82 of Longview Texas, will be held at 4:00 p.m. on Monday August 30th, in the chapel of Rader Funeral home in Longview. Wilma was better known as Dimple, to a good portion of her sizeable family. Wilma passed on Monday August 23rd at her home, surrounded by the people that loved her and that she loved, her family. Born on April 5, 1939, in Naples Texas, Wilma was the youngest of five siblings, born to Cleo and Loyd Lancaster. Wilma graduated from New Diana High School in 1957 where she met the love of her life, Garland Boyd. Garland enlisted in the United States Navy just out of school. While home on Christmas leave, Garland and Wilma were married on December 23rd. They were married for 63 years. Wilma passed a mere 4 months after Garland. Wilma was a devoted Navy wife for 22 years at which time Garland retired in 1976. Wilma retired as a regional secretary from NOWCAM and later went on to own and operate Curves of Kilgore. Wilma took great pride in her family. Often to be found with a grandbaby in her arms or hosting numerous family get togethers. She was a loving Mother, Maw Maw, sister, Aunt, wife and friend. An avid Dallas Cowboys fan! “Go Cowboys!” She also enjoyed bowling. Wilma and Garland were both members of a bowling league for most of their lives. She was preceded in death by her parents, Cleo and Loyd. Her four siblings. Her son, Chuck, her grandson Jeffrey and her husband Garland. She is survived by one son Steve Boyd and husband Morgan and one daughter Montina Boyd Steller. Her grandchildren, Brandi Posey and husband James, Courtney Boyd, Meagan Wallace and husband Jerry, Matthew Boyd and wife Heather and Dylan Steller. 15 great- grandchildren, numerous nieces, nephews, cousins and other family members. Wilma will be dearly missed by all that had the privilege of knowing her.

Memorial Services for Wilma Faye Boyd, 82 of Longview Texas, will be held at 4:00 p.m. on Monday August 30th, in the chapel of Rader Funeral home in Longview. Wilma was better known as Dimple, to a good portion of her sizeable family. Wilma... View Obituary & Service Information

The family of Wilma Faye Boyd created this Life Tributes page to make it easy to share your memories.

Send flowers to the Boyd family.