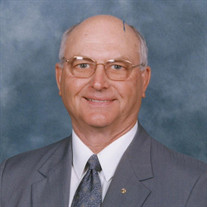 William Henry (Bill) Villyard, age 80, died peacefully at home into the arms of his Lord and Savior, Jesus Christ, on Wednesday February 2, 2022, after a courageous battle with Alzheimer’s and physical degeneration. Gene Villyard, the love of his life, was by his side visiting and praying with a long time and dear church friend when he took his final breaths. He was born October 7, 1941, in Overton, Texas to Christine and Clayton Villyard and raised in the Getty/Tidewater oil camp off Hwy 42 in Kilgore, Texas. He attended Leverette’s Chapel schools where he graduated in 1960. He was a super proud LCHS Lion and excelled in football, basketball, baseball and tennis. Though, we suspect he joined the tennis team just to be near his sweetheart who he first met in 7th grade and by then was in a blossoming relationship. William and Willie Gene Williams went on to marry in August 1961 celebrating their 60th anniversary this past summer with many friends and family present. After graduation William began his undergraduate studies at nearby Kilgore Junior College and completed his Bachelor of Science in Business Administration from Stephen F. Austin in 1964. William wore many hats during his lifetime literally and figuratively. He was one of the hardest working people you ever met. He always had an invention, idea or business opportunity working including numerous dba’s in Longview, Texas. As serial entrepreneurs are prone to do after setting up many of these, he would leave it to someone else to operate (often Gene or a family member); and off he would go to the next idea or job! What set William apart was his infectious smile, friendliness and natural affinity for people. He never met a stranger. He had an innate ability to talk with and befriend anyone whether at a horseback trail ride, the cashier at a convenience store, a business call with an operator’s representative in the oilfield, the leadership of his Masonic Temple, or the First Baptist Church of Longview. The family went on Chevy Chase style vacations in the station wagon (“Vacation” was one of his favorite movies), and he’d be talking to someone for an extended length of time. We assumed he ran into someone he knew. Nope. Making new acquaintances was his specialty. What you didn’t know was that if needed, he probably was also handing that stranger the last $20 bill in his pocket. Even through the tough times in the Villyard household after the energy bust of the 1980’s, it never stopped him from giving. Giving graciously and without fanfare was a trait he possessed and cherished. William had many, many hobbies he enjoyed including competitive horseback trail riding, tennis, golf, square dancing, hunting, fishing, antique collecting and restoring old cars to name a few. He never missed an opportunity to coach a sport his kids were involved including the “old lifeguard” from his high school days when he was teaching the grandkids how to swim and dive. He was a Deacon at First Baptist Church Longview and a member of the choir for half a century. He served as Past Worshipful Master of Masonic Lodge 404 and member of the Shriners Sharon Temple of Tyler for over 25 years. William loved to sing and was a lifetime member of SPEBSQSA (Barbershop Quartet) and the Kiwanis Club of Longview. With all the above, you would think there wasn’t room for more; yet one of his favorites was Kilgore Preservation Foundation, Derrick Committee Chair. It included nearly all his hobbies and key attributes (i.e. talking with people, finding antiquities, acquiring the rights to them, preserving history and resettling them in downtown Kilgore for future generations to see). William is survived by his devoted wife Gene Villyard, children Kyle Villyard and wife Carla of Katy, TX, Kirt Villyard and Keith Villyard, four beloved grandchildren Jennifer, Stephanie, Max and Molly Villyard whom all called him “Papa Will” along with many nieces and nephews whom called him “Uncle Bill” or “Uncle William” and numerous cousins. His favorite name may have been “Brother” whether it was with his brother Dwain and wife Sherry Villyard or sister Diane and husband Merritt Johnson or his “brothers” at Temple or in church. Surviving in-laws include F.T. Williams Jr. and Wendie, Judy Ann Williams, and Lewis and Trudy Albarado. On Friday, February 11, 2022, at Rader Funeral Home in Longview, a visitation will be held at 1:00 pm with memorial service following at 2:00 pm. Final interment will then be afterwards at Kilgore City Cemetery in Kilgore, Texas. In lieu of flowers, memorials can be sent to the Alzheimer Association of America, Leverette’s Chapel Foundation, Shriner Children’s Hospital or Kilgore Preservation Foundation.

William Henry (Bill) Villyard, age 80, died peacefully at home into the arms of his Lord and Savior, Jesus Christ, on Wednesday February 2, 2022, after a courageous battle with Alzheimer&#8217;s and physical degeneration. Gene Villyard, the... View Obituary & Service Information

The family of William Villyard created this Life Tributes page to make it easy to share your memories.

Send flowers to the Villyard family.