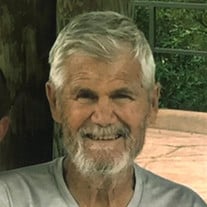 William Allen Hill doesn’t meet a stranger. Most know him as Bill. His late spouse, Brenda, and those who know him from youth call him Allen. And, his grandchildren call him Pa. He would say, “Just don’t call me late for dinner.” Those who met him saw him as full of life. He was thoughtful of others, had a big heart, and a hard working man. Over 46 years he worked and retired from Central Freight Lines. If you were a customer, he went an extra mile to give great service. Off duty, practically everywhere he went, Bill would see someone he knew. He loved to hunt, fish, spend time with his grandchildren, attend church, and enjoyed classic western television, Cowboy football games, and good cooking. At Unity Missionary Baptist Church in Longview he served as deacon, BTC Director, and Secretary Treasurer for a congregation he saw as a second family. October 1, 2019, William Allen “Bill” Hill passed away peacefully at home after a long fight with cancer at the age of 79. Born January 4, 1940 near Beckville, TX to Geraldine (Allen) and Charles C. Hill. William was also blessed to call Ollie Mangham his dad. Allen was married to Brenda Joyce Hughes of Long Branch, TX for 47 years. William is survived by his son Kirk of Longview, Texas; his daughter and son-in-law Stephanie and Brian Botkin of Longview, Texas; grandsons Taylor Bell, Logan Botkin, Jonathan and Nathan Hill; granddaughter Allison Hill; and his brother Tony Hill of Palestine, Texas; and sister Delilah (Mangham) and brother-in-law George Henley of Sherman, Texas; sister-in-law Suzie Hill; brother-in-law Sammy Hughes of Irving, Texas; uncle Bill Mangham of Longview, Texas; and numerous cousins, nieces, nephews, and others. William is preceded in passing by his loving spouse, Brenda Hill; his parents Geraldine and Ollie Mangham; and brother Johnny Hill. Funeral services will be 12 p.m. October 5, 2019, preceded by visitation at 11 a.m. at Rader Funeral Home in Longview. He will be laid to rest in Long Branch Boynton Cemetery in Long Branch, Texas following services.

William Allen Hill doesn&#8217;t meet a stranger. Most know him as Bill. His late spouse, Brenda, and those who know him from youth call him Allen. And, his grandchildren call him Pa. He would say, &#8220;Just don&#8217;t call me late for dinner.&#8221; Those... View Obituary & Service Information

The family of William Allen Hill created this Life Tributes page to make it easy to share your memories.

William Allen Hill doesn’t meet a stranger. Most know him as...

Send flowers to the Hill family.