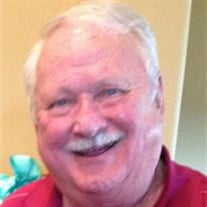 William Earle Bullock, 79, of Tyler, Texas died September 9, 2013 at ETMC in Tyler, Texas Mr. Bullock was born February 28, 1934 in Shreveport, LA to Eldred and Willie Mae Melton Bullock. He graduated from Byrd High School and Centenary College in Shreveport, LA. He was a Certified Property Manager and received his MBA from Northwestern University of Chicago, IL He retired as an Investment Advisor from A.G. Edwards in Springdale, Ark. Other occupations include property management in Chicago, IL and a real estate property developer in Rogers, Ark. He is survived by his wife Janet Blizzard Bullock and her children George and Lee of Austin, Greg Lee of Ft. Worth, Mike and Jan McClain of Longview, Tx and their children and Grandchildren, his son Paul E Bullock and his wife Shelley of Bloomington, Indiana, their children Baden Bullock, Chance and Aline Bedford, Kristof Bullock, his daughter Mary Elizabeth Horstmann of Bella Vista, Ark, and one sister Juanita Bullock of Keithville, LA. Several nieces and cousins. His friends from first grade that have been dear friends his entire life are Phil and Elaine Risher , Shreveport, LA and Father Edward Buvens, Denver, Co. He was previously married to Gail Bullock of Dallas, TX. He was preceded in death by his parents, son Gregg of Austin, and daughter Lindy Bullock-Cox of Dallas TX. He was a wonderful husband, the world's best father and everybody's best friend, He was a great bridge player, just ask his friends. He was a kind, empathetic person with a great sense of humor. He will never be forgotten by those who knew and loved him. The Funeral will be held at Rader Funeral home in Longview, TX at 2:00 P.M. Thursday

The family of William Earle Bullock created this Life Tributes page to make it easy to share your memories.

Send flowers to the Bullock family.