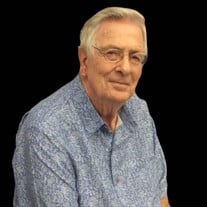 Wayne Deakins, a prince of a man and much-loved by so many, was born on June 2, 1939, in Lubbock,Texas to Alton and Madie Deakins. He passed away on May 7 after a lengthy illness. Moving to Longview in 1957, he lived and worked with his Uncle Homer on Deakins Ranch in Hallsville. Soon after, he met Carolyn Wright, a good-looking Kilgore Rangerette, falling hard for her. Married only three months later, they grew in the love that would carry them through sixty-three years together. Eventually, Teresa and Sheri arrived, thus completing their close-knit family. As a father, he always put his “girls” before anything else, even worrying in his final, frail days that they might need him and he wouldn’t be there. An ideal dad, he was forever kind, warm, loving, generous, and always encouraging. An avid fisherman and deer hunter, Wayne enjoyed being outdoors more than anything. He hunted with his brothers-in-law and son-in-law all over Texas, with South Texas and the Hill Country his two favorite places in the world. And while he loved hunting, his favorite part was the camaraderie of story-telling around a camp fire with his fellow deer hunters. He continued sharing vivid hunting and fishing stories right up to the end of his life. He loved being in his yard with Carolyn, usually working on some sort of garden project together, but sometimes just sitting on the patio. Dad was also something of an inventor, and he designed several hunting devices that could’ve made him a millionaire had he been so inclined for that life. He cleverly rigged his riding lawn mower to accommodate his physical limitations, and it was all the talk in his neighborhood. In recent years he designed a cane holder for his walker, which made for great conversation anywhere he went. “Deak” worked at Texas Eastman for 30 years, then retired and worked for Hallsville ISD for 20 years until he retired a second time at 75. His great joy was his fellow workers, and his years at HISD were some of the happiest in his life. Dad also touched many young people’s lives while at HISD, mentoring them like a father. In fact, his greatest roles were husband, father, grandfather and great-grandfather. He loved nothing more than big family get-togethers over fried fish, cold beer, and fun times shared. He is survived by his wife Carolyn; daughters, Teresa Read (Tommy) and Sheri Burlingame (Bill); grandchildren, Andrew McWhorter, Ashley Powell (Vic), Caroline Burlingame, Katherine Burlingame, Abby Read; great-grandchildren, Ava Powell, Lydia Powell, Deakin Powell and many nieces and nephews who adored their Papa D and Uncle Wayne. Special sisters-in-law, Loretta Barnes, Sue Wright, and Dorothy Wright were truly like sisters to him. He leaves behind many people who will miss him deeply and will never get used to his being gone. Preceding him in death are his parents, Sonny Deakins (his older brother); Agnes Wright, Willard Wright, Jeanette Wright, Little Wayne Wright, Bill Barnes, Larry Wright, Willard Wright, Jr., and Jerry Wright—all who adored him and are happy to see him again. Special heartfelt thanks go to the many close friends, nurses, and aides at Heartsway Hospice, who visited dad countless times in the last months and were a blessing to the entire family. Finally, we are forever grateful for Missy Mitchell, who is an “Angel” from God, who tenderly cared for him during the last months of his life and has become a member of the Deakins family. Between mom’s and Missy’s loving care, dad was able to stay comfortably at home until his death. He is now telling Jesus hunting and fishing stories! Wayne’s Memorial Service will be at St. Michael and All Angels’ Episcopal Church, 909 Reel Road, Longview, where he and Carolyn have been members since 1978. The service will be held on Saturday, May 14 starting at 1:00 p.m. with a Visitation/Reception following in the Fellowship Hall.

Wayne Deakins, a prince of a man and much-loved by so many, was born on June 2, 1939, in Lubbock,Texas to Alton and Madie Deakins. He passed away on May 7 after a lengthy illness. Moving to Longview in 1957, he lived and worked with his Uncle... View Obituary & Service Information

The family of Wendell Wayne "Deak" Deakins created this Life Tributes page to make it easy to share your memories.

Wayne Deakins, a prince of a man and much-loved by so many, was...

Send flowers to the Deakins family.