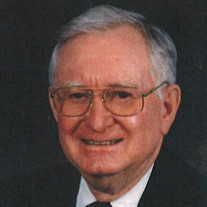 Graveside funeral services for Mr. Walter Hugh Harrell, 96, of Lubbock,Texas will be held Saturday, April 3, 2021 at City of Lubbock Cemetery at 10 a.m. with Reverend Calvin Gray officiating under the direction of Rader Funeral Home, Longview, Texas. Mr. Harrell was born May 29, 1924, in Waco, Texas to his parents Walter and Eula Harrell and passed away on March 30, 2021 in Longview, Texas. Hugh was a World War II veteran where he served his country as a surgical tech in Paris, France. After the war, he graduated in 1950 with his law degree from Baylor University. In 1951, Hugh moved to Lubbock, Texas to set up his law practice. He enjoyed his law practice there from 1951-2014. In 1969, Hugh earned his doctorate of law. He participated in the community serving on the Board of Directors at GirlsTown located in Whiteface, Texas, and was active in the Lubbock Kiwanis Club. Later, he assisted young law students by holding Mock Court at Texas Tech University. Mr. Harrell had two great loves in his life; his wife, Dorothy and all things BAYLOR BEARS! He met the love of his life, Dorothy Howell, whom he married in 1955 and led to 65 years of happy marriage. The couple raised their three children in Lubbock. They were long time members of the First Baptist Church of Lubbock. Hugh passed down his interest of hunting, fishing and playing tennis to his children. He enjoyed coaching Dixie Little League baseball and basketball. Hugh and Dorothy enjoyed being with their Lubbock friends playing bridge and dancing the night away in the Terpsichorean Dance Club. They enjoyed traveling the world taking cruises and tours. In 2014, Hugh semi-retired his law practice and moved with Dorothy to Longview, Texas. Those left to cherish his memory are his wife, Dorothy Marie Harrell of Longview, Texas; son Gary Harrell and wife Emily of Ft. Worth, Texas; daughter Deborah Wasson and husband Don of Longview, Texas; son Stephen Harrell and wife Jennifer of Flower Mound, Texas; grandson, Preston Harrell of Dallas; grandson, Josh Wasson and wife Katye of Gladewater; granddaughter, Shelby Bonn and husband Will of San Antonio. Hugh was blessed with two great grandsons Mason Larrington and Holden Wasson whom he enjoyed so very much.

The family of Walter Hugh Harrell created this Life Tributes page to make it easy to share your memories.

Send flowers to the Harrell family.