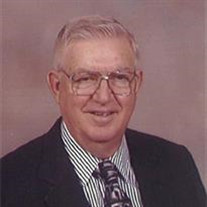 W.M. "Bill" Stauts William Milton "Bill" Stauts of Longview passed away on March 27, 2013, at the age of 80. Graveside services will be held on Friday, March 29, 2013, at 2:00 pm at Memory Park Cemetery in Longview, TX, with Dr. James "Butch" Tanner officiating. Visitation will be held at Rader Funeral Home at 1617 Judson Road, Longview, TX, on Thursday, March 28, 2013, from 6:00 - 8:00 pm. Bill was born on August 12, 1932, in Conroe, TX, to Elbert and Robbie Stauts. He was preceded in death by his parents and his son, David Joel Stauts. After graduating from Marshall High School, Bill entered Texas A&M College where he was a member of the Corps of Cadets, graduating in 1953 with a BS degree in industrial technology and an officer's commission in the US Air Force. He served in the USAF for several years in Nagoya, Japan, attaining the rank of Captain. After his honorable discharge, Bill was involved in a variety of engineering applications, ultimately retiring from LTV and Stemco. In his retirement, he particularly enjoyed working in the yard and the challenge of online family history and genealogy research. Bill is survived by his loving wife of 54 years, Judy Harris Stauts of Longview; son Philip Stauts; daughter Melanie and husband, Alan W. Pigg and his beloved granddaughter, Madeline Rose Pigg, all of Tyler. He is also survived by his sister, Alline and husband, James L. Fyffe of Marshall; and several nieces and nephews. The family is truly grateful for the staff of Beacon Hospice at Margaret's House for their kind and compassionate care. In lieu of flowers, memorials may be made to either Oakland Heights Baptist Church, 1600 Judson Road, Longview, TX 75601 or Christian Homes & Family Services, 13359 Hwy 155 South, Tyler TX, 75703.

The family of W. M. "Bill" Stauts created this Life Tributes page to make it easy to share your memories.

Send flowers to the Stauts family.