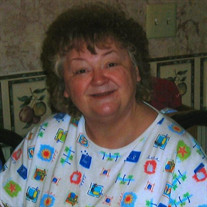 Vera Ann Harrison was born on August 8, 1948 in Laurinburg, NC to Thomas and Violet Blackwell. Her and her family later moved to Northeast Texas where she lived in Daingerfield, Omaha, and Naples, TX. She attended school in Daingerfield and Omaha. As an adult, she lived in Houston, TX and later moved back to East Texas, where she established her roots in Longview, TX. Vera was given many roles in life, however, one of her greatest was becoming a mother to “her girls:” Sheila, Tracie, and Rhonda. Her daughters and family were her heart and strength. She was a hard-working woman, dedicating many years to her work at Good Shepherd Medical Center, working in Special Functions/Catering where she later retired. She married her soul mate in 1982, Donald Harrison, and the two enjoyed 39 years of marriage. She was later promoted to Grandmother and Great-Grandmother. She adored her grandchildren and great-grandchildren and enjoyed spoiling all of them. She was the rock of her family, and always held everyone together. She brought love, joy, kindness, and sweetness to all who knew her. Vera shown a lot of love through her cooking, which was her “gift.” If you have ever eaten one of her meals, especially her dressing, that meant she truly loved you. Vera was a loving daughter, sister, mother, wife, aunt, grandmother, great-grandmother, and an amazing friend. She is survived by her husband, Donald Harrison of Longview, TX; her brother, Jackie Blackwell of Longview; Daughters Sheila Ezernack and Tracie Deason of Longview; Grandchildren Rachel Munoz and Husband Ricky Munoz of Longview; Amanda Henderson of White Oak; Maddox Deason of White Oak; Makale McClelland and husband Kody McClelland of White Oak; and Christopher Henderson of White Oak; a special niece, Jamie Smith of Longview, and fiancé Mason English; Great-Grandchildren Erika, Jakob, Ariana, Mallory, Parker, Aniyah, Kinsly, and Levi. She is proceeded in death by her mother and father, Thomas and Violet Blackwell, her niece Carol Blackwell, her daughter Rhonda Betts, and several family members .

Vera Ann Harrison was born on August 8, 1948 in Laurinburg, NC to Thomas and Violet Blackwell. Her and her family later moved to Northeast Texas where she lived in Daingerfield, Omaha, and Naples, TX. She attended school in Daingerfield and... View Obituary & Service Information

The family of Vera Harrison created this Life Tributes page to make it easy to share your memories.

Send flowers to the Harrison family.