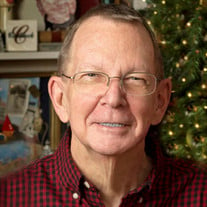 LONGVIEW — A celebration of the life of Van Dorn Craddock, Jr., 73, of Longview, is set for 11 a.m. Tuesday, Jan. 4, at First United Methodist Church in downtown Longview with the Rev. Jay Jackson officiating. Visitation will follow in the Cook Foyer at the church. Van was born in Gladewater on July 1, 1948, to Van Sr. and Dorothy Latimer Craddock. He completed his earthly journey peacefully on Dec. 31 at home after a battle with Alzheimer’s and vascular dementia. He was a proud graduate of Longview High School Class of 1966 and an avid Lobo fan. He attended Kilgore College and was a 1970 graduate of Stephen F. Austin State University where he met the love of his life, Bettye, in a journalism class. They celebrated their 51st wedding anniversary on Dec. 18. After graduation,Van worked in the sports department of the Longview News-Journal before he was drafted and served in the U.S. Army in Vietnam from 1971-72 where he was the editor and cartoonist for The Army Reporter. After returning from Vietnam, he worked in the public relations department for Lone Star Steel, then began working at the Longview News-Journal in 1978 where he served in many capacities, including reporter, city editor and entertainment editor. He also wrote a weekly history-and-humor column for 42 years, published in the LN-J and several other East Texas newspapers. For years he could be heard each weekday morning broadcasting a program called “Craddock at Large” on KFRO Radio where he shared his wit and wisdom. He also worked in public relations at Good Shepherd Medical Center and served as communications director at First United Methodist Church of Longview. He was a loving son, father and grandfather who cherished his family, especially his “Better Half,” his two children and two grandchildren. One of his biggest joys was spending time with his two granddaughters, Abby and Macy, who affectionately called him “Pops.” The Craddocks have been active members of First United Methodist Church and the Grace Lowrey Sunday School Class since 1972. He was the emcee for the monthly Pioneer luncheon for senior adults. In 2009 he received the Pauline Cargill Award for outstanding service to the Gregg County Historical Museum and in 2011 was named Man of the Year by the Longview Federated Clubs. He authored six books of East Texas history and collections of his News-Journal columns. The first book of columns was titled “I Would’ve Been a Lumberjack But I Couldn’t Hack It” (1991). The second book of columns, published in 2009, was called “East Texas Tales: A Celebration of Pineywoods People, Places, Facts and Fables.” His latest collection of columns was titled “East Texas Tales, Book 2,” published in 2014. He was also author of a 2006 book, “Historic Gregg County,” a project of the Gregg County Historical Commission; as well as a postcard history of Longview, published in 2010. Van was a member of Post 4002, Veterans of Foreign Wars. He served on the City of Longview Historical Preservation Commission and the Gregg County Historical Commission. Van also volunteered with the Gregg County Historical Museum for a number of years, co-chairing and writing the script for the annual Dalton Days celebration. He was an avid storyteller, always loved a good pun. and was known for his sense of humor. In 2018 his life-long wish was granted: the Longview Lobo football team finally won a state championship during his lifetime. Last but not least, he was also a proud member of the Mayberry Union High Chapter of the Andy Griffith Show Rerun Watchers Club. He was preceded in death by his parents and his sister-in-law, Mollie Herrington. Van is survived by wife Bettye; son Chris of Longview; daughter Cathy Tenner, and granddaughters Abby and Macy Tenner of Allen; brother in-law C.B. Herrington of Tyler; nephew John Herrington of Dallas; niece Holly McClaren (husband Clint) and great nieces Rachel and Sarah McClaren of Spring and numerous cousins. Memorials may be made to First United Methodist Church, 400 N. Fredonia St., Longview, TX 75601; or to the Bettye and Van Craddock Journalism Scholarship at Stephen F. Austin State University, SFA Development Office, c/o Scott Allen, P.O. Box 6092, SFA Station; Nacogdoches, TX 75962; or a charity of your choice. The service will be livestreamed on the church website: longviewfumc.org.

LONGVIEW &#8212; A celebration of the life of Van Dorn Craddock, Jr., 73, of Longview, is set for 11 a.m. Tuesday, Jan. 4, at First United Methodist Church in downtown Longview with the Rev. Jay Jackson officiating. Visitation will follow in... View Obituary & Service Information

The family of Van Dorn Craddock Jr created this Life Tributes page to make it easy to share your memories.

LONGVIEW — A celebration of the life of Van Dorn Craddock, Jr.,...

Send flowers to the Craddock family.