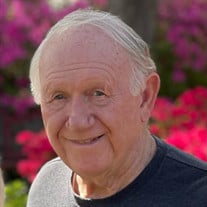 Herman Troy White passed away unexpectedly on April 12, 2022. Though he is away from the body, he is at home with the Lord. Troy was born in Paris, TX on August 9, 1943. Troy was an identical twin born to Homer and Mable White. As the smaller, very low birth weight twin, he was not expected to survive. His size was small, earning him the nickname, Peanut, but his spirit was enormous. He spent his childhood in Blossom, TX where he graduated from Blossom High School in 1961. He continued his education at East Texas State University, where he earned his bachelor’s degree and masters degree in Chemistry and Math.. Some matchmaking members of the family set him up on a blind date with Barbara Jean Barton. A match indeed they were and were married August 20, 1965. They welcomed their only daughter, Julie Amber White, into the world on July 27, 1976. All would agree that Julie was always the apple of his eye. Troy loved big, and he loved well. His bear hugs and silly sayings will be sorely missed. His joy was infectious. His smile and personality lit up any space when he walked up. He made each person feel special. A more kind hearted and generous man could not be found. He was frequently serving and giving to others. He loved his people fiercely. He loved Jean with all his heart and honored her daily. Troy enjoyed his adventures with his posse of friends, and family was his world, including his brothers, in-laws, and all the nieces and nephews. Julie could do no wrong in his eyes, and he enjoyed fixing stuff and building things with Jason. His two grandchildren, Rylie and Tate, brought him pure joy. For many years he was on the sidelines watching them do what they enjoy. He rarely missed a game from tee ball to high school volleyball and football games to track meets. Troy was so proud of Rylie and Tate and was often found telling anyone who would listen about them. Not only did he touch the lives of his dear family and friends, but he made a difference to the thousands of students he taught at Pine Tree ISD over almost 40 years. Aside from his teaching career in public schools, he also taught at the college level, drove a school bus, worked at a steel plant, and lastly at Ana-Lab, an analytical testing lab in Kilgore. He enjoyed woodworking and building rustic home decor and furniture. He loved being outside, working in his yard, camping, and fishing. Troy loved well because he loved Jesus. He allowed God to work in and through his life in everything he did. God’ s Design is for us to understand the love of our Father through the human relationship of an earthly father, even though human relationships are flawed. Troy demonstrated the Father’s love in a way that made it easier to understand what the unconditional love of God the Father is like. Though Troy only had one daughter, many agree that he loved them as his own. He is survived by his loving wife, Jean White, daughter, Julie White Smith, son-in-law, Jason Smith, and grandchildren, Rylie Smith and Tate Smith. He also leaves behind his identical twin brother, Roy White, and oldest brother, James White, and their families. Beloved in-laws and their families and friends will miss him dearly. He is preceded in death by his parents, Homer and Mable White, and mother and father in-law, Calvin and Mae Bell Barton, brother Bo White, and sister Alice White Gauntt. He was a faithful member of Pine Tree Church of Christ for over 50 years. Rise and shine. It’s a mighty fine day in Glory with you there. Funeral Services for Mr. White will be held Saturday, April 16 at 10 am in the Chapel of Rader Funeral Home of Longview. With time for visitation one hour prior to the services. Burial will follow at Lakeview Memorial Gardens.

Herman Troy White passed away unexpectedly on April 12, 2022. Though he is away from the body, he is at home with the Lord. Troy was born in Paris, TX on August 9, 1943. Troy was an identical twin born to Homer and Mable White. As the smaller,... View Obituary & Service Information

The family of Troy White created this Life Tributes page to make it easy to share your memories.

Send flowers to the White family.