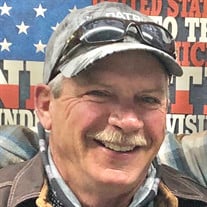 A service of celebration for the life and legacy of Tracy Steven Carpenter will be held at Greggton United Methodist Church on Saturday November 20,2021 at 10:00 am with the Reverend Ricky Ricks officiating. The family will receive friends on Friday November 19, 2021 at Rader Funeral Home from 5-7pm. Steve passed into the eternal arms of Jesus on November 17, 2021 after an eight week battle with Covid19 Steve was born on October 20, 1961 in Montgomery, Alabama to Lieutenant Temple Carpenter, Jr. and LaJuan Lowe Carpenter. He spent his childhood in several locations but settled in and called Longview his home. Steve spent a 40 year career in the Oil and Gas industry, most recently as President and Co-Owner of Patriot Process Equipment in White Oak, Texas. He was a well-respected member of his profession and worked to build relationships and provide solutions for his customers, many who he considered close friends. Steve was an avid outdoorsman. He believed that nature and the outdoors were a gift from God and he loved to be out on the lakes or in the woods. He instilled this belief in all who came in contact with him and passes that passion on to many. He was preceded in death by his father, Temple S. Carpenter, Jr. and his nephews Chris and Corey Carpenter. He is survived by his wife, Cindy Carpenter of Longview, Texas. Four children and their spouses- April (Gary) Weber of Lubbock, Texas. Todd (Alexandra) of Austin, Texas Tara (Randall) Peck of Kilgore and Ashley (Chris) Jones of Kilgore. The pride of his life-his eight grandchildren- Summer, Rhedd, Addison, Travis, Trevor, Carter, Weston, and Koree. He is also survived by his mother, LaJuan Carpenter of Longview. His brother and sister-in-law, Temple S. “Tem” Carpenter III and wife Sandra. His nephew Brandon(Paige) Bussey of Lake Cherokee. His stepmother, Emma Carpenter of Longview. His very special friends Ken Mathews and Terry Slayden of Longview. Several sister in laws and numerous cousins and nieces and nephews The family wishes to extend heartfelt thanks to the ICU team at Longview Regional for his care and to the thousands of family and friends that prayed for Steve. The family has entrusted Rader Funeral home with the arrangements. Please make donations to the charity of your choice or The Wounded Warrior Project at https://www.woundedwarriorproject.org/

A service of celebration for the life and legacy of Tracy Steven Carpenter will be held at Greggton United Methodist Church on Saturday November 20,2021 at 10:00 am with the Reverend Ricky Ricks officiating. The family will receive friends on... View Obituary & Service Information

The family of Tracy Steven Carpenter created this Life Tributes page to make it easy to share your memories.

A service of celebration for the life and legacy of Tracy Steven...

Send flowers to the Carpenter family.