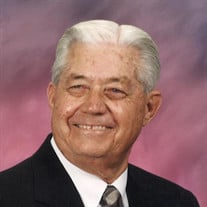 Tommy Jack Phillips was born November 13, 1931, in Saint Jo, TX to John and Eloise Phillips. At an early age, the family moved to Borger, TX, where Tommy received his education, began his professional life and most importantly, met the love of his life, Joelyn Andress. Married for 68 years they had two children, Jack and Karen. Tommy’s career in oil and gas production equipment manufacturing and sales led him to leave Borger, first to Pampa, then to Perryton, TX. Another promotion carried the family to Casper, Wyoming then Denver, Colorado. His biggest career move was to Tulsa, Oklahoma where, after leaving corporate life and starting his own business, he finally retired in Longview. He enjoyed many great years with grandchildren and in service to Christ. He passed peacefully at home. Tommy was a man who truly desired to be the man God wanted him to be and set a personal standard of devotion and humility for his family and everyone around him. He was preceded in death by his parents; brothers Arvin and Teddy; and his sister, Marie. He is survived by his wife, Joelyn; son and daughter-in-law Jack and Julie of Casper, Wyoming; daughter and son-in-law Karen and Lance Roe of Longview; grandchildren Autumn Phillips of Charleston, SC, Gabriel Phillips of Casper, Wyoming, Loren Roe and wife Betsy of Tyler, Bryan Roe and wife Angela of Royse City, and Colin Roe and wife Ashton of Irving; and great grandchildren Myah Phillips, Elliot Roe, Norah and Henry Roe. A celebration of Tommy’s life will be held at 1 PM Thursday, July 22, 2021 in the Chapel of Rader Funeral Home of Longview with Reverend Scott Schulik officiating. The family will receive friends following the service. Tommy always had a heart for Cal Farley’s Boys Ranch in Amarillo. Please consider a memorial donation to them or HeartsWay Hospice. A memorial guestbook may be signed online at www.raderfh.com.

Tommy Jack Phillips was born November 13, 1931, in Saint Jo, TX to John and Eloise Phillips. At an early age, the family moved to Borger, TX, where Tommy received his education, began his professional life and most importantly, met the love... View Obituary & Service Information

The family of Tommy Jack Phillips created this Life Tributes page to make it easy to share your memories.

Send flowers to the Phillips family.