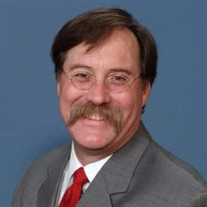 Tom A. Keith, 62, of Longview, passed away peacefully on April 29, 2022. He was born January 6, 1960 in Lubbock, TX to Red and Barbara Keith. From an early age, my father displayed a zest for life that was infectious, and he never met anyone who wasn’t his friend. At the age of 6, he started riding bulls in rodeo arenas across the Midwest. He often spoke of traveling on the rodeo circuit with his father and sisters as some of the best times of his life. Old cowboys have told me over the years that he was fearless, and never backed down from a challenge – he had grit beyond measure. Despite growing up in Oklahoma, dad always considered himself a Texan. In 1982, he moved to Marshall, TX where he worked at KMHT as an on-air personality, program manager, and engineer. After moving to Longview, he successfully ran his Allstate agency for nearly 30 years with the mantra of “serve others first.” This mindset extended to the larger community where he organized multiple “Make A Wish” golf tournaments, before assisting in the establishment of Judson Metro Fire Department. Growing up, I watched my father care for people during the best, and worst moments of their lives - he had an amazing gift in providing comfort for those who needed it most. Even with all the struggles and hardship he endured personally, he still made a point to show kindness wherever he went. He was the true embodiment of a “servant leader,” and this world is truly darker without him. However, his legacy of kindness and love will endure, just as his faith in God inspired him to be a shining light for others. In all, Tom Keith was an amazing father, friend, brother, and son. He was adored by all who knew him. As his son, I will never forget his lessons and approach to life: “if you hurt inside, you never make anyone else feel it too. You do everything you can to take the bad out of this world and leave only good.” Tom is preceded in death by his parents, Red and Barbara Keith, and his youngest son, Aaron. He is survived by his oldest son, Austin of Seattle, WA, sisters Rhonda, Debbie, and Kim of Choctaw, OK; Dee of Wasilla, AK, and numerous friends, and loved ones. Services will be held Wednesday, May 4th at 2pm - St. Michael’s and All Angels in Longview. As an additional option to flowers, our family requests donations be made in his name to Judson Metro Volunteer Fire Department (436 Skinner Lane, Longview, TX 75605).

Tom A. Keith, 62, of Longview, passed away peacefully on April 29, 2022. He was born January 6, 1960 in Lubbock, TX to Red and Barbara Keith. From an early age, my father displayed a zest for life that was infectious, and he never met anyone... View Obituary & Service Information

The family of Tommy "Tom" Allen Keith created this Life Tributes page to make it easy to share your memories.

Tom A. Keith, 62, of Longview, passed away peacefully on April...

Send flowers to the Keith family.