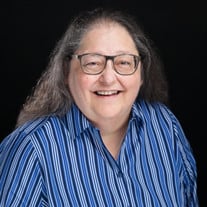 Services for Susan Grace Threadgill, 61, of Austin are scheduled for 2:00pm Friday October 8, 2021 in the Chapel of Rader Funeral Home in Henderson, Texas, with visitation one hour prior to the service. Don Edmiston will officiate. Burial will follow in the Shiloh Cemetery under the direction of Rader Funeral Home, Henderson. Ms. Threadgill passed away Sunday October 3, 2021. She was born April 28, 1960 in Dallas, one of four children of A. J. "Jack" and Doris Edwards Threadgill, both deceased. She is also preceded in death by her brother Andrew “Andy” Threadgill. Susan lived in Dallas until age 10, at which time the family moved to Henderson, Texas. She graduated as salutatorian from Henderson High School and attended Southern Methodist University for a three-year dual major in creative writing and theatre, graduating magna cum laude. Susan also completed a special term for foreign students at SMU at Queen’s College, University of Oxford, Oxford, England. Susan’s reputation as a stage manager in the Austin arts community was legendary. Known as “she who must be obeyed,” she was a production stage manager for the Austin Lyric Opera for 22 years. She went on to become Associate Director of Production and Director of Production for University Events at the University of Texas (UT) at Austin, where for over 10 years she guided the production of University-wide events including Explore UT, Gone to Texas, and Commencement. She assisted with several high-profile events including the 2014 Civil Rights Summit at the LBJ Presidential Library that included Presidents Carter, Clinton, Bush, and Obama (as a sitting president), and the 2016 LBJ Presidential Library Summit on the Vietnam War that included documentary filmmaker Ken Burns, and former secretaries of State Madeleine Albright, Henry Kissinger, and John Kerry. In 2014, Susan received the Distinguished Achievement Award in Management from the United States Institute for Theatre Technology. She did freelance work for the Austin Symphony, Zilker Theatre Productions, and Conspirare, and served as production stage manager for the UT Performing Arts Center. Over the course of her career, Susan served as production manager for at least 50 opera performances, 20 musicals, and eight of Shakespeare’s plays. Throughout her 38-year career in the arts, she wore many hats: actor, technician, stage manager, production manager, producer, director, combat choreographer, librettist, and playwright. She recalled most fondly the projects that allowed her to marry the arts with education, mentoring young technicians, managers, and performers as they took their first steps on the paths to their own careers. Colleagues and performers knew her as a dedicated, competent professional who ran a tight ship, and tempered strictness with kindness, integrity, a strong sense of caring, and a lot of fun. A force of nature with an infectious laugh and unmatched sense of humor, Susan was much more than her incredible resume. To many, she was known as her alter ego, Mysta Gonagin, or any of a dozen characters she played at Dungeons & Dragons tables across the country. Susan was a huge player for good and fun in Living Greyhawk and various other gaming communities since at least the early 1990s. No one inspired more people in Texas and Oklahoma (and likely many other states) to elevate their role-playing than Susan did. To others, she was the “Queen of Texas Paintball,” having been a member of a nationally ranked paintball team. Her team was so accomplished that they toured the country for several years, sponsored by the manufacturers of the paintball equipment. To her family, Sue was a loyal and loving, steadfast presence, full of stories and laughter. Kind and welcoming, she always had a smile and words of encouragement, supporting her loved ones through good times and bad. We remain in awe of the brilliant, talented person she was, and of how much she meant to so many. The family would like to thank Trinka Withers and Sylvester Ruffin for their constant companionship and devotion to Susan’s care. Susan is survived by two brothers: John D. and wife Kay Threadgill of Dallas; Chris and wife Teresa Threadgill of Henderson; four nieces and one nephew: Whitney T. Mahan, Erin and husband David Davila, Abby Threadgill, Kristen Threadgill, Jackson and wife Michelle Threadgill; two great nieces, Tiffany and Nevaeh Mahan, and two great nephews, Dre Mahan and Lucas Davila. View the complete obituary at raderfh.com/obituaries/. In lieu of flowers, the family asks for donations to Orange Santa at UT Austin at https://giving.utexas.edu/orangesanta, or by check to University Events, PO Box S, Austin, TX, 78712. Checks should be made payable to “The University of Texas at Austin” and coded “Orange Santa.” Please include a note designating gifts In Memory of Susan Threadgill. Susan, flee! Be gone!

Services for Susan Grace Threadgill, 61, of Austin are scheduled for 2:00pm Friday October 8, 2021 in the Chapel of Rader Funeral Home in Henderson, Texas, with visitation one hour prior to the service. Don Edmiston will officiate. Burial will... View Obituary & Service Information

The family of Susan Threadgill created this Life Tributes page to make it easy to share your memories.

Services for Susan Grace Threadgill, 61, of Austin are scheduled...

Send flowers to the Threadgill family.