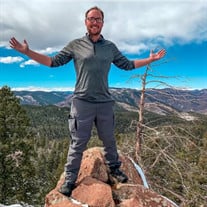 Stewart Linthicum was born September 5th 1988, in Longview, TX, and entered Heaven June 16th 2021, following a brief battle with cancer. He transitioned peacefully, surrounded by his family in their home early Wednesday morning. A memorial service will be held for Stewart on June 22nd at 10:30 AM, in the sanctuary of Oakland Heights Baptist Church- 1600 Judson Rd. Longview, TX. The family will receive friends and guests for the hour prior to the service beginning at 9:15 AM. Stewart is survived by his parents Kevin and Susan Linthicum; sister, Alexis Leatherman and her husband David Leatherman; beloved niece, Emersyn Rae Leatherman; grandparents David and Peggy Stewart, and Bob and Barbara Linthicum, along with numerous aunts, uncles, and cousins. Stewart attended Trinity School of Texas from 1992-2005, before graduating from Hope Christian High School in Albuquerque, NM in 2007. Majoring in Photography with a minor in Communications, Stewart attended the University of New Mexico, graduating in 2011 with his Bachelor’s Degree. During his Sophomore year there, he participated in a foreign exchange program to Linkoping, Sweden where his love for travel became evident. It was there that Stewart learned to push the boundaries and never fear the unknown. Using his art and communication skills, Stewart traveled around the United States and abroad capturing God’s beauty in creation everywhere he went. This passion for capturing beauty partnered with his love for God, led Stewart to serve in Malawi, Africa, Honduras, and Brazil alongside his father on various mission projects. It was not uncommon for Stewart to travel throughout Europe on a whim or explore the beauty of nature in various U.S. National Parks. Stewart was naturally gifted in all mediums of art from a young age. As he grew and developed his talent, it was clear to everyone that Stewart would thrive in any environment that allowed him to create and share his creative gift. He saw life through a lens very few people ever access- the lens of possibility. Whether working with coworkers on a shared project exchanging ideas or helping a young person as they dipped their toe into the world he loved of photography and art, he knew how to unlock possibility in every person he met. After several years working in ministry, Stewart sought new horizons by taking a job in Denver, Colorado with Unbridled Solutions. This company provided him an opportunity to contribute his creativity in a different way, and it was incredibly clear it was the perfect place for him. His creative genius was invaluable to the company and clients, and you could always find Stewart helping on various projects- no matter the department or content. His generous spirit was evident to all. In his first year at Unbridled, his co-workers nominated him for the Community Award, celebrating Stewart for his intentional efforts to cultivate community. On the weekend, he rallied his co-workers and friends to explore the beauty of Colorado- hiking, camping, hammocking, and the like. Every adventure brought new connections, new insight, and new breath-taking photographs. In early May, Stewart was unexpectedly diagnosed with Stage 4 Esophageal Cancer that spread throughout his body. Knowing treatment was a long-shot, Stewart held on to his faith and family and lived his final six weeks of life at home with his parents and sister. Because of Stewart’s love of Africa and the work being done there, it was Stewart’s desire that in lieu of flowers, donations be made to Oakland Heights Baptist Church Malawi Mission Fund. A memorial guestbook may be signed online at www.raderfh.com.

The family of Stewart Coker Linthicum created this Life Tributes page to make it easy to share your memories.

Send flowers to the Linthicum family.