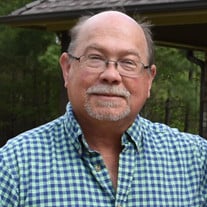 Steven “Cole” Fuller was born to Halley and Lena Fuller in Longview, TX. He passed away on the evening of October 11, 2021, at the age of 61. Cole was a life-long resident of Longview, excluding time spent in Austin, to attend school, and Dallas, to work alongside his two brothers in their own Pizzeria. While living in Dallas, he met his loving wife of 36 years, Holly. Cole was also a lifelong member of Mobberly Baptist Church. Holly and Cole were married surrounded by family and friends in Garland, TX. After having their first and only son, Zachary Fuller, they moved back to Longview to be near family. Cole was a class favorite during his time at Longview High School. He was a proud member of the LHS class of 1978. Cole made many friends throughout his life and remained connected until the end. They shared many memories of skiing and fishing at Lake Cherokee, hunting, camping at Lake O’ the Pines and attending Lobo football games. As a Licensed Professional Counselor for more than 25 years, Cole was blessed with the gift of working with inmates during their incarceration. He made a profound difference in people’s lives and led numerous people to Christ during his tenure. He spent the latter part of his career counseling young people at the Gregg County Juvenile Detention Center. Cole wanted to reach young adults while there was time to have the most impact in their life. He was able to relate to teens and encourage them in a positive direction. Cole had a quick wit and enjoyed telling jokes. He had personal favorites surrounding every holiday. “Hare restorer and permanent wave!” was one of his favorites. Many Thanksgiving and Christmas holidays were spent at his grandmother, “Effie” Worsham’s home, his mother-in-law Dorthy Thomas’s home, and his residence in Longview. Cole enjoyed family gatherings and being surrounded by loved ones. His grandchildren brought a new joy to his life over the past six years. Cole enjoyed playing games, telling stories, riding in the “big truck”, and fishing with Dabney and Izetta. He always had an activity or made up games as a way to build memories with them. Cole is now dancing in Heaven with his mother, Lena Worsham Fuller, after having a big plate of Ma’s chicken fried steak and mashed potatoes. Those left to continue Cole’s legacy are his father, Halley; wife, Holly; daughter by choice, Milena Jankovic; son, Zach Fuller and his wife, Miranda and children, Dabney and Izetta; brother, Mac Fuller; brother, Joe Fuller and his wife, Lucretia; along with niece, Maddie O’Laire, nephews, Joseph Fuller and Ben Fuller; great nieces and nephew, and a host of friends and family that loved Cole dearly. In lieu of flowers, memorials may be made to Longview Type One Diabetes Foundation, PO Box 5023, Longview, TX 75608 or at LongviewTypeOne.org/donations.

Steven &#8220;Cole&#8221; Fuller was born to Halley and Lena Fuller in Longview, TX. He passed away on the evening of October 11, 2021, at the age of 61. Cole was a life-long resident of Longview, excluding time spent in Austin, to attend school,... View Obituary & Service Information

The family of Steven "Cole" Fuller created this Life Tributes page to make it easy to share your memories.

Steven “Cole” Fuller was born to Halley and Lena Fuller in Longview,...

Send flowers to the Fuller family.