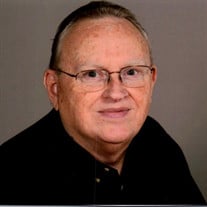 Memorial services will be held for Stephen Lance Lamb at 1:30 p.m. on Monday April 12, 2021 at First Presbyterian Church, Longview, Texas. There will be a private internment at a later date. Stephen died at home early on the morning of April 6th with his wife at his side. He had a long struggle with many physical ailments after his initial stroke in 2005. He fought a brave battle always with humor and he never complained. Stephen was born January 30, 1951, in Ft. Worth, Texas. He lived in Longview as a child and attended Longview schools. His greatest memories of his young life are the relationships he had with his brother and sister, his mom and dad, and his childhood friends. He dearly loved playing in the Lobo Band. He graduated from high school in 1969 and attended Trinity University in San Antonio. In 1973 he graduated from the Texas DPS, and later was a policeman for the San Antonio International Airport. He moved back to Longview in the late 1970’s and worked for a number of years at Big Three Industries. At that time he also returned to college and graduated from the University of Texas at Tyler Stephen loved to play golf with his buddies and with his wife, ride motorcycles and work in the yard until he was no longer physically able to do so. Stephen was a gifted photographer and at one time had a large collection of cameras, both modern and antique. He regretted the emergence of digital photography because he felt it took the glamour and fun out of photography. Although Stephen was a member of First Presbyterian Church and at one time, St. Andrew Presbyterian Church, he had a very strong attachment to First Presbyterian where he grew up, sang in the choir, and grew in his faith. He had many stories to tell and happy memories of his times in the Church and especially his time singing in the choir. He was not vocal about his faith, but he had a deep and abiding love for his Lord that guided his every moment. He was preceded in death by his mother and father, Rosa Richkie Lamb and Guy Lance Lamb, and by his aunts Sara Whitehurst and Mary Finley. Stephen is survived by his wife of 30 years, Betty Dickey Lamb. He is also survived by his son and daughter-in-law, Stephen T. Lamb and Kendra Lamb, of Broken Arrow, Oklahoma, his son and daughter-in-law, Alexander L. Lamb and Barbara Lamb, of Orlando, Florida, and his grandchildren, Elizabeth Ann Lamb, Lauren Nicole Lamb, Alexander Lamb, Jr., Anna Nell Lamb, Chloe Lamb, Jenna Braz and Justin Braz. He is also survived by his brother, David Lamb of San Francisco, California, his sister, Lou Corones of Spokane, Washington, and his cousin Gayle Hansen of San Francisco, California. In lieu of flowers, the family requests that donations be made to the First Presbyterian Church of Longview, Camp Gilmont, or a foundation or charity of your choice.

Memorial services will be held for Stephen Lance Lamb at 1:30 p.m. on Monday April 12, 2021 at First Presbyterian Church, Longview, Texas. There will be a private internment at a later date. Stephen died at home early on the morning of April... View Obituary & Service Information

The family of Stephen Lance Lamb created this Life Tributes page to make it easy to share your memories.

Memorial services will be held for Stephen Lance Lamb at 1:30...

Send flowers to the Lamb family.