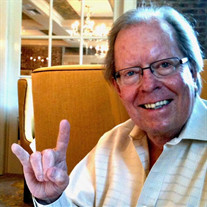 Stephen Robert Butter passed away July 23, 2021, at his home in Longview, Texas with his loving wife, Patricia by his side. He was preceded in death by his parents, Leo Edison Butter and Billie Potts Butter. Born April 15, 1937, in Fort Worth, Texas, he grew up and attended school in Longview, Texas graduating from Longview High School in 1954 where he was elected King of the student body and started at center for two years for the Longview Lobo football team. He graduated with a BBA degree in banking and finance from the University of Texas at Austin where he was named a Goodfellow by the Cactus yearbook. He was a member and pasts president of the Silver Spurs honorary service organization and a member of Phi Delta Theta fraternity. Alumnae activities included President’s Association, Chancellor’s Council and establishing the Stephen R. Butter Endowed Scholarship. Summers were spent working on his father’s ranch in Hallsville, Texas raising Santa Gertrudis cattle. Following graduation from The University in 1958, he entered the family business started by his father in 1930. He became Chairman of the International Group of 22 supply houses across the state of Texas. In serving his industry, he was Chairman of the Wholesale Distributors Association of Texas, Louisiana, Arkansas, Oklahoma, New Mexico and Colorado, and director of the American Supply Association. In serving his community, he was a Director at First National Bank, Texas Commerce Bank, First Federal Savings and Loan Association, President of Good Shepherd Medical Center Board and of the Longview Chamber of Commerce. Stephen is survived by his loving wife of 14 years, Patricia Butter and her son, Tanner Singleton and his wife, Missy of Grand Prairie, Texas; He is also survived by his sisters, Bette Brinson of Houston and Susan Chambers of Austin; the mother of his children, Linda Ryan Thomas and husband, Charles of Longview; three sons, Leo Ryan Butter and wife, Paulette of Longview, Texas, Zane Ryan Butter and wife, Jane of Dallas, Texas and Stephen Robert Butter, Jr. and wife, Lucy of Austin, Texas and his daughter, Alexis Ryan Combest and husband, Scotty of Tyler, Texas; 12 Grandchildren, Ryan Butter, Alex Butter, Bella Butter, Z. B. Butter and wife, Sarah Frances, William Butter, Trey Butter, Tate Butter, Christian Combest, Lauren Combest, Victoria Combest, Finn Singleton and Opal Singleton. His sister-in-law, Karol Perrine and 2 nieces and a nephew. Patricia would like to thank HeartsWay Hospice of Northeast Texas, especially, Josh Oden, for their compassion and care. At his request there will be no service. Memorials may be given to the Leukemia & Lymphoma Society 3 International Drive, Suite 200, Rye Brook, NY 10573, Heartsway Hospice 4351 McCann Rd., Longview, TX, TX 75605 or to your favorite charity.

Stephen Robert Butter passed away July 23, 2021, at his home in Longview, Texas with his loving wife, Patricia by his side. He was preceded in death by his parents, Leo Edison Butter and Billie Potts Butter. Born April 15, 1937, in Fort Worth,... View Obituary & Service Information

The family of Stephen Robert Butter created this Life Tributes page to make it easy to share your memories.

Send flowers to the Butter family.