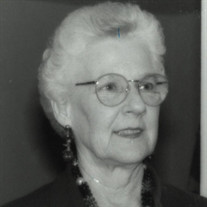 Shirley Caldwell passed away on Monday, February 14, 2022 in Longview, TX. Services for Shirley will be held on Friday, February 18 at 2pm at Memory Park Cemetery with Father Bill Carrol officiating. Shirley's father, Claude Patrick Caldwell was from Ireland. He served in the British Navy about the battleship HMS Braham during World War I. Her mother, Carmen Jenkins, was from Eureka Springs, Arkansas. They met and were married in Dallas, TX, on March 19, 1928. On September 12, 1930 Shirley and her identical twin, Sharon, were born in San Antonio, TX. The family moved to Longview in 1941. Shirley graduated from Longview High School in 1947, Kilgore Junior Colleg in 1949, and Stephen F. Austin State University in 1951 with a Bachelor's Degree in Business Administration. She was an avid tennis player during her teens (playing doubles with Sharon) and early adult years; loved watching the golf pros on TV; and loved working in the yard. Shirley worked for the Law firm of Smead and Harbour for over 13 years before moving to New Orleans, LA in 1965 to work for Amoco Production Company. After 24 years of service, she retired as a Lease Analyst from Amoco (now BP p.i.c.) in 1989. She was proud of her heroic forefathers who fought in the American Revolution. She was a member of the following organizations: Aaron Burleson Chapter, NSDAR, (Longview); Thomas Noble Chapter, NSDAC, (New Orleans); Robert Ruffin Chapter, CDXVII Century, (New Orleans); and Chalmette Chapter, USD of 1812 (New Orleans). She was preceded in death by her parents, Pat and Carmen Caldwell, and her sister, Sharon. Shirley is survived by her nephew, Clay Whatley and her brother-in-law, Wesley Whatley. In lieu of flowers, memorial donations may be made in her name to the Guiding Eyes for the Blind, P.O. Box 97007, Washington DC, 20090-7007; or to the choice of the donor. Shirley will be reunited with her beloved Alexis and Buttons.

The family of Shirley Caldwell created this Life Tributes page to make it easy to share your memories.

Send flowers to the Caldwell family.