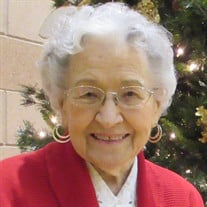 LONGVIEW – A Celebration of Life for Ruth Flemister, 95, will be 1:30 p.m. May 19, 2021, at First United Methodist Church with the Rev. Jay Jackson officiating. Visitation will follow in the Cook Foyer. A family graveside service at Lakeview Memorial Gardens will precede the memorial service. Ruth was born Carrie Lettie Ruth Carnes to Leona Goggans and James Corbit Carnes in Wills Point, Texas, on February 1, 1926, and passed from this life on May 15, 2021. She graduated from Wills Point High School at age 16 and promptly moved to Dallas. At age 18 she established her own beauty shop during World War II and met her future husband, Dr. Robert Brooks Flemister whom she married on February 1, 1946, her 20th birthday. After a few years the couple moved to Iowa for Rob to attend chiropractic school. They moved back to Dallas in 1950, then lived in Houston and Marshall. They moved to Longview in 1960 and joined the First United Methodist Church where Ruth gave her time and talents for more than 60 years, serving at times as financial secretary, president of Women’s Society of Christian Service and Sunday School class founder. A master seamstress, she also founded the quilting ministry and sewed for the Threads of Love Ministry. She found great joy in cooking, especially homemade pies from scratch. She also loved sharing the beautiful camellias that bountifully bloomed in her yard. Married to a chiropractor, Ruth was active in the Women’s Auxiliary of the Texas Chiropractic Association where she served as state president. She was preceded in death by her husband, parents, siblings baby Carnes and Elizabeth Sneed of Terrell, and son in law William Clark Shafer. Those left to cherish her memory are her three children, Regina Flemister Shafer of Longview, Brooks Lee Flemister (wife Charmaine) of Houston and James Earnest Flemister (wife Deronda) of Longview; grandchildren Matt Clark Shafer (wife Kristin) of Aledo, Ann Marie Shafer Flournoy (husband Andrew) of Fort Worth, Mallory Layne Flemister Wilhelm (husband Brandon) of Gig Harbor, Washington, Margaret Rose Flemister Eakins (husband Andey) of Austin, Robert Arthur Flemister and Brittany Rae Flemister of Longview, Ulric James Flemister of Houston; great-grandchildren, Ella, Olivia and Luke Shafer, Roland and Gene Wilhelm, and Macey and Aussie Eakins; siblings, Jan Jungjohann and James (Jimmy) C. Carnes Jr. along with numerous nieces and nephews. A loving mother, grandmother and great-grandmother, Ruth will be greatly missed. She was forever a servant and a role model of Love for all. She was truly devoted to her faith, family and friends. In lieu of flowers, memorials may be made to First United Methodist Church and Threads of Love. An online guestbook may be signed at www.raderfh.com

LONGVIEW &#8211; A Celebration of Life for Ruth Flemister, 95, will be 1:30 p.m. May 19, 2021, at First United Methodist Church with the Rev. Jay Jackson officiating. Visitation will follow in the Cook Foyer. A family graveside service at... View Obituary & Service Information

The family of Ruth Flemister created this Life Tributes page to make it easy to share your memories.

LONGVIEW – A Celebration of Life for Ruth Flemister, 95, will...

Send flowers to the Flemister family.