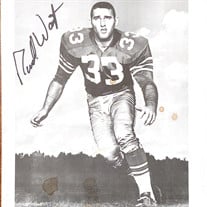 Russell Gene Wayt left this earth to be with his Lord on January 10, 2020. Russell was born the last of nine children to Edna and Don C. Wayt on October 6, 1942. Russell was always grateful to his parents and siblings for their devotion to him when he contracted polio at eighteen months. They were told that he would never walk again. The Wayt family was quarantined for a short time, and they were told to feed him as many bananas and chocolate that he wanted. It was called the Sister Shirley Method. This was a revolutionary treatment for polio at the time, and it was successful. The family moved to White Oak in 1946 with Sinclair Oil. Russell graduated from White Oak High School in 1960 with athletic and scholastic honors. He earned All-State honors in football and basketball and proudly displayed his State Medal earned in journalism competition. He also set a UIL State Record in the discus throw. His accomplishments led to an academic scholarship to Rice University where he earned a B.S. degree in Commerce while playing football, basketball and track for the Owls. He was selected to play in the college All-Star Football Game his senior year at Rice. Following graduation from Rice, Russell married his high school sweetheart and love of his life Patricia Deloris Musslewhite. Russell and Pat began an exciting chapter in life when he was drafted by the Dallas Cowboys and played outside linebacker under coach Tom Landry. Fellow players were Bob Lilly, Don Meredith, and Chuck Howley. Russell also served in the National Guard during this time. After leaving the Cowboys, Russell returned to his beloved White Oak to begin his career in insurance and real estate. He and partner David Reynolds bought Penick’s grocery store as their first project in 1967. Russell ran it for a few years before selling and moving on to other ventures. Reynolds and Wayt continued to develop real estate in White Oak greatly expanding the area’s commercial and residential development. Additionally, Russell was also a general agent for American National Property and Casualty Insurance, and he maintained an office in White Oak. Russell and Pat were blessed with two sons, Chris and Kevin, both graduates of White Oak High School. Russell continued his lifelong support of White Oak schools, eventually working to help establish the White Oak Education Foundation. Russell and Pat worked in fundraising for the Foundation and helped bring the highly profitable Monster Truck event to White Oak. The Wayts traveled the world and furnished their home with many treasures from their trips. Russell loved entertaining friends and family and was known for his generous hospitality. The addition of two granddaughters to the family brought immense joy to his life, and he would not hesitate to tell you about their accomplishments. Russell was a lifelong Baptist and was strong in his faith. He was a member of First Baptist Church, Longview where he served as a deacon. He also served on the Board of Directors of Chrisman Preparatory School, the American Bank Board of Directors, the East Texas Baptist University Board of Directors, and the White Oak Education Foundation Board. Russell was preceded in death by his parents and by siblings Annette Drake, Alberta King, Patsy Ann Dunklin, Elbert Wayt, and Dewayne Wayt. He is survived by Pat, his wife of 54 years, sons Chris and his wife Sheri, Kevin and granddaughters Abby and Emma Wayt. He is also survived by siblings Peggy Jo Schroeder and husband John of Safford, Arizona, June Perryman of Gladewater, TX, and Bob Wayt and wife Shirley of Houston, TX. He is remembered by many special nieces and nephews and a host of friends. A memorial service to honor his life and faith will be held at White Oak Community Church on Saturday, January 18 at 10am. A private graveside ceremony will be held by the family at a later date. The family wishes to thank his nurse April Borden and caregivers Peggy Starling and Sandra Epps of LifeCare Hospice for their professional and compassionate service. In lieu of flowers, memorials may be made to the White Oak Education Foundation.

Russell Gene Wayt left this earth to be with his Lord on January 10, 2020. Russell was born the last of nine children to Edna and Don C. Wayt on October 6, 1942. Russell was always grateful to his parents and siblings for their devotion to... View Obituary & Service Information

The family of Russell Wayt created this Life Tributes page to make it easy to share your memories.

Russell Gene Wayt left this earth to be with his Lord on January...

Send flowers to the Wayt family.