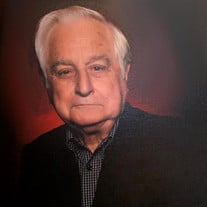 Roy David Sturkie was born on April 24, 1933, to Zechariah & Marie Spires Sturkie in Wagener, South Carolina. The youngest of nine children, he enlisted in the United States Air Force shortly after graduating from high school in 1950. While stationed in Waco, Texas, he met his future wife, Catherine Joan Whisenhunt. They were married in 1955 at the First Baptist Church of Gladewater, TX. Roy received a Bachelor of Science Degree in Electrical Engineering at Southern Methodist University in Dallas, TX, and went on to have a long and successful career in the Aerospace Industry. He was grateful to those individuals who helped him along the way; to his sergeant who advised him that he needed to learn to type and to another superior who suggested that he study electronics while in the Air Force. Roy was part of the team which worked on developing the first global positioning systems (GPS) while at Magnavox Research. Roy is survived by his wife of sixty-six years, Catherine Joan Sturkie, eight children; Alissa (Mike), David (Donna), Matt (Alex), Kim (Kyle), Paul, Tim (Jill), John (Edith), and Elizabeth, thirteen grandchildren: James and Katy Hearon, Sarabeth Hearon, Catherine and Christopher Callahan, David and Kristin Hearon, Jared Sanders, Mary Grace Hearon, Jon Tanner, Abby Tanner, Caroline Sturkie, Charlotte Sturkie, Cameron Sturkie, Josiah Sturkie and Susanna Sturkie, and one great granddaughter: Gracie Beth Hearon. Viewing will be at Radar Funeral Home in Longview on Tuesday, November 23rd, from 5:00-7:00 p.m and services will be on Wednesday, November 24th at 12:00 pm. In lieu of flowers, donations can be made to the Highway 80 Rescue Mission (https://hiway80rm.org/donate) in Roy's name.

Roy David Sturkie was born on April 24, 1933, to Zechariah & Marie Spires Sturkie in Wagener, South Carolina. The youngest of nine children, he enlisted in the United States Air Force shortly after graduating from high school in 1950. While... View Obituary & Service Information

The family of Roy David Sturkie created this Life Tributes page to make it easy to share your memories.

Send flowers to the Sturkie family.