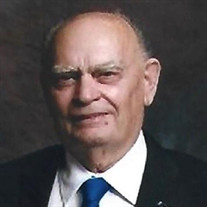 Funeral services for Roy Lee Simmons Sr., age 86 of Henderson, will be held at Rader Funeral Home Saturday January 23, 2021 at 11 AM. Services will be officiated by Rev. David Gatlin and Kyle Gatlin with interment to follow at New Salem Cemetery. The chapel services will be live streamed from the obituary page on the Rader website. Mr. Simmons passed from this life to his eternal home in Heaven Friday January 15, 2021. Roy was born on May 9, 1934 in Rusk County to the late Rev. W.A. and Lura Simmons. He joined the Army in 1954 and endured jump school at Fort Cambell Kentucky to become part of the 11th Airborne Division. While in Kentucky he met his beloved wife of 54 years, Goldie Marie Simmons. Mr Simmons had a love for music that was only surpassed by his love for the Lord and his family. He was a long standing member at Friendship Missionary Baptist Church in the Jumbo Community. Leaning on the Lord led him to be a faithful and unwavering servant leading singing for churches most of his adult life and finally for the congregation at Friendship until the time of his death. Roy also served as an active deacon and spent countless hours dividing the Word of God through study. It was through his study that he was able to teach his in-depth and well articulated Adult Sunday School lessons. His devotion to serving the Lord will leave a legacy for generations to come. Mr. Simmons was preceded in death by his father and mother, his wife, and siblings: Jaunita James, Morris Simmons, Ina Rowell, Rev. Jack Simmons, John Simmons, Rev. Ralph Simmons, and Charlie Ray Simmons. Roy was survived by children: Lura and Greg Cash of Hallsville, Tina and Joe Files, Sandy and David Gatlin, Lisa and Ricky Zorn, Roy Lee Jr. and Michelle Simmons, and Johnny and Trista Simmons all of Henderson. Siblings Syble and Mack Bassett of Henderson, Norman and Diane Simmons of Mena Arkansas, Judy Gilstrap of Carthage, Michael Simmons of Huntington, and Barbara Simmons of Henderson. Brother and Sister in-laws Jerald and Nancy Daughtery, Tondra and Debbie Daughtery, Mike Daughtery, Barbara and Donald Yates, and Teresa and Paul Parker all of Kentucky. Grandchildren Jason Faggard, Taylor Copenhaver, Thomas Files, Keri Leadon, Keith Gatlin, Kyle Gatlin, Kasey Curry, Luke Zorn, Tracey Miles, Tommy Lee Zorn, Tabitha Johnston, Dakotah Simmons, Rachel Hutchinson, Emili Simmons, and Garrett Simmons. He is also survived by 28 great-grandchildren, 1 great, great-grandchild, and a host of nieces and nephews. Pallbearers will be Keith Gatlin, Justin Curry, Thomas Files, Luke Zorn, Dakotah Simmons, Garrett Simmons, and Tommy Lee Zorn.

Funeral services for Roy Lee Simmons Sr., age 86 of Henderson, will be held at Rader Funeral Home Saturday January 23, 2021 at 11 AM. Services will be officiated by Rev. David Gatlin and Kyle Gatlin with interment to follow at New Salem Cemetery.... View Obituary & Service Information

The family of Roy Lee Simmons created this Life Tributes page to make it easy to share your memories.

Send flowers to the Simmons family.