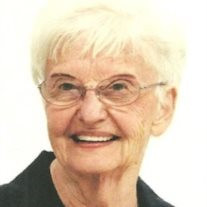 Services for Rosemary Dunn Walford will be at 2p.m., Saturday, April 5, 2014, in the sanctuary of St. Andrew Presbyterian Church, 2500 McCann Road, Longview, Texas, with the Rev. Kemper Huber officiating. A reception for family and friends will follow the service in the Fellowship Hall. Rosemary died on April 2, 2014. She was born in DeLeon, Texas, on September 3, 1930, to William Everett Clement and Verna Sarilda Clement. After next living briefly in Dublin, Texas, her family moved to Abilene, Texas, where she attended the Abilene pubic schools from the first grade through her graduation from Abilene High School. Rosemary then attended Hardin-Simmons University in Abilene, and graduated with a B.A. in Education; she subsequently received a Master's in Education from Hardin-Simmons. Legend has it that while at Abilene High she made the highest score on a school-wide IQ test, "beating" two young men in second place by a single point--one a long-time family friend who would go on to graduate from Princeton University and achieve success in international business, the other a future medical school dean (who would also soon become her husband). While she was an undergraduate, Rosemary worked as an aide to Professor Leonard Burford and Professor Jack Burford, renowned musicians and teachers at Abilene Christian University. The Burfords were both blind, and Rosemary always said that the privilege of working with them gave her a unique appreciation of the true fullness of life that she could not have gained in any other way. She and her family remained life-long friends of the Burfords. Following her graduation from college, Rosemary taught in the public schools of Dallas, Texas, lived briefly in Philadelphia, Pennsylvania (where her husband was in a residency/fellowship program in pathology), and then returned to her hometown of Abilene, where she soon resumed her career as a teacher, first at Franklin Junior High, and then at Jefferson Junior High--which she had attended years earlier as a student when the school was called South Junior High. Appreciated, respected, and loved by her colleagues and her students, Rosemary earned a well-deserved reputation as a truly excellent teacher. She taught "special education" for several years, and taught regular and honors classes over the years in a variety of subjects, including English, Reading and History. Recognition for her excellence as a classroom teacher came in the form of numerous honors and awards. More informally, she amazed her colleagues and administrators by teaching classes in a very relaxed atmosphere, but never had even a hint of any discipline problems. More than once, Rosemary turned down offers to become an administrator because she wanted to remain in the classroom. For many years she enjoyed active involvement in teachers' organizations, such as Texas State Teachers Association and Texas Classroom Teachers Association at both local and state levels. In 2009, Rosemary moved to Longview, Texas, to be near her son and daughter-inn-law, Clement and Terre Dunn, and her grandchildren, Charlie and Mackenzie (and their Golden Retriever, Rex). In only a short time, she made many friends, in church, in her neighborhood, and in the community. Rosemary always liked being outside, gardening or walking her Collie, Lucy. She especially enjoyed spending time with her grandchildren. Rosemary grew up as an active member of the First Christian Church (Disciples of Christ) in Abilene. Later, when that church formed a second church, she and her parents became charter members of what started as South Side Christian Church and later became Brook Hollow Christian Church. Rosemary faithfully attended and worked in her church her entire life, teaching Sunday School, singing in the choir, serving on the Board of Trustees. When she moved to Longview, she joined St. Andrew Presbyterian Church, where she regularly attended church services. Rosemary was preceded in death by her parents; by her brother, Foy Clement; by her first husband, Dr. Marvin Dunn; by her husband of sixteen years, Berkely Walford; and by her brothers-in-law, Dr. F.J. King and Dr. George Robinson. She is survived by her sisters, Anna Verne Robinson of Albuquerque, New Mexico, and Maxine King of Tallahassee, Florida; her son and daughter-in-law and her grandchildren.

Services for Rosemary Dunn Walford will be at 2p.m., Saturday, April 5, 2014, in the sanctuary of St. Andrew Presbyterian Church, 2500 McCann Road, Longview, Texas, with the Rev. Kemper Huber officiating. A reception for family and friends... View Obituary & Service Information

The family of Rosemary Dunn Walford created this Life Tributes page to make it easy to share your memories.

Services for Rosemary Dunn Walford will be at 2p.m., Saturday,...

Send flowers to the Walford family.