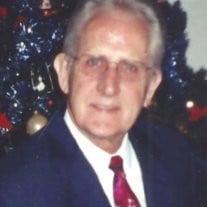 Lifetime servant of our Lord and Savior, Reverend Ronnie W. Starr closed his eyes here on earth and opened them to see the majesty of Heaven on November 4, 2013. Ronnie gave his heart to Christ at the tender age of 15 and felt the Lord’s calling upon his life to preach the gospel at age 17. Pastoring churches in Dallas, Houston and the East Texas area, Ronnie humbly served his beloved Heavenly Father for over 50 years. During that time, Ronnie traveled many states, preaching the gospel through the ministry of evangelism. He was instrumental in mentoring many young pastors as his door was always open, to assist or give spiritual guidance to those who sought to serve the Lord. Known as one of the greatest church builders of his time, Ronnie was used by the Lord to increase membership through numerical growth and record baptisms. And yet when asked of this supernatural blessing, Ronnie would always answer, “To God be the Glory, to God be the Glory!” Ronnie retired from the pastorate in 2002 yet continued to serve his Lord by preaching and teaching the gospel until his illness. In the midst of his battle, the presence of the Lord could be felt by those all around him, including the precious staff of Good Shepherd Medical Center, who so graciously cared for him in his final days. Surviving Ronnie are his wife, June Thurman Starr; two daughters and sons in law, Cheryl and Eric Radford, April and Bart Kendall; six grandchildren, Erica, Houston and Noah Radford, Collin, Conner and Christopher Kendall; one Brother in law and wife, Les and Cindy Thurman; one nephew and wife, Jay and Sherri Thurman; and one cousin and husband, Doris and Johnny Davenport. Visitation will be at Rader Funeral Home, Longview on Friday, November 8, from 5-7 p.m. Funeral service will be held at Forest Home Baptist Church, Kilgore on Saturday, November 9, at 10 a.m. with Reverend Earl “Buddy” Duggins and Reverend Ray Tenpenny officiating.

Lifetime servant of our Lord and Savior, Reverend Ronnie W. Starr closed his eyes here on earth and opened them to see the majesty of Heaven on November 4, 2013. Ronnie gave his heart to Christ at the tender age of 15 and felt the Lord&#8217;s... View Obituary & Service Information

The family of Ronnie W. Starr created this Life Tributes page to make it easy to share your memories.

Send flowers to the Starr family.