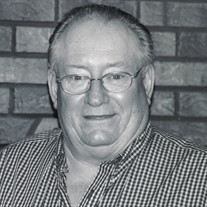 Ronald Lee “Pinky” Pinkerton LONGVIEW Ronald L. “Pinky” Pinkerton was born April 19, 1947 in Seminole, Oklahoma to Clyde and Alice Petross Pinkerton and passed away October 24, 2017 in Longview, Texas. Services will be held Saturday October 28, 2017 at 2:00 P.M. with a visitation at 1:00 P.M. at Greggton United Methodist Church, Longview, Texas. Graveside services will be at Little Cemetery in Little, OK. Monday, October 30, 2017 at 10:00 A.M. Ron grew up in Seminole and had his first job at a factory cutting pieces for Wrangler jeans. In 1967, he joined the Army and served in Fuerth, Germany with the 94th Artillery until 1969. He then went on to work for International Paper Company in Spring Hill and Mansfield, LA for 40 years. He retired in 2009 to enjoy his hobbies of golf, tinkering with 1929 Model A Ford, all things Elvis, and his love of Oklahoma University Football. In Mansfield, Ron served on the board of The Back Alley Theater, was a driving force in the Nursing Home Ministry, and also served on the Board of Trustees for First United Methodist Church. He was a 32 degree Mason. After moving to Longview, Ron joined Greggton United Methodist Church. He volunteered for Meals on Wheels and joined the East Texas Vintage Car Club. Ron had a collection of jokes that he loved to tell but his most outstanding quality was that of a generous soul. He gave freely of his time and gifts to those he loved and to those he did not know, but loved just the same. He is survived by his wife of 18 years Judy, sister Imogene Thomas, twin brother Donald Pinkerton and wife Wanda and sister Francine Douglas and husband Mickey all of Seminole, OK. And Aunt Millie Doris Wilcher of Bakersfield, CA. Also surviving him are his step children Stephen Jones and wife Susan of Longview. Susan Jones and Jason Ball of Canby, Oregon and Katherine Jones of Longview. Grandchildren include Mary-Claire and Ethan Jones of Longview, grandchild and good friend Jordan Jones, and wife Bre; Great Grandchild, Trent and several nieces and nephews. Ron is also survived by his faithful fur companion, George. The family wishes to thank those who cared for Ron including Dr. Glenn McDonald, Davita Fourth Street, Dr. James Harrell, Dr. Sohaila Roshan, Dr. Mark A. Witt, and home health caregiver, Ashley Hawes. Rest in Peace Ron, your humor and goodness will be missed. Memorials may be made to First United Methodist Church, Mansfield, LA or Greggton United Methodist church, Longview, TX.

The family of Ronald Lee Pinkerton created this Life Tributes page to make it easy to share your memories.

Send flowers to the Pinkerton family.