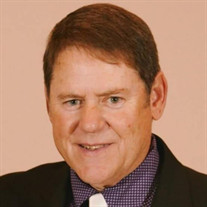 Services for Ronald Day Yandle, 66, of Henderson, will be held at 1:00 p.m. on Wednesday, July 21, 2021, in the chapel of Rader Funeral Home in Henderson with Danny King officiating. The family will receive friends from 12:00 p.m. until service time on Wednesday, at the funeral home. Ron passed from this life on Saturday, July 17, 2021. He was born on February 20, 1955, in Ft. Smith, Arkansas to the late Wayne and Bean Yandle of Henderson. Ron was a loving husband, father, brother, uncle and was known as “Big Daddy” to his grandson Chais who was the light of his life. He was always the life of the party and loved his Whataburger. Ron touched the lives of everyone he met and will truly be missed. Ron worked in the oilfield and sales. He had a love for hunting and spending time with his family and friends who he loved dearly. He was an active member with the Rusk County Go Texans advancing to many levels within the Go Texans. Ron was also involved with many organizations and loved supporting his community. In addition to his parents, he was preceded in death by his brother Donnie Yandle. Survivors include his wife of 34 years, Loma Yandle, daughter, Cheyenne Yandle Ashmore and husband Cullen, grandson, Chais, sister, Teri Yandle, nephew, Austin Day Yandle, sister-in-law, Sandra Yandle all of Henderson, brothers-in-law, Monty Riley and wife Chaundra of Tatum, Michael Riley and Becky Simpler of Hallsville and a host of nieces, nephews, other family and friends Pallbearers will be Austin Yandle, Cullen Ashmore, Larry King, Ken Evans, Rodney Riley, Michael Rodgers, David Rodgers, Chance Riley and Byron Underwood. Honorary pallbearers will be Monty Riley, Michael Riley, Dan Thomas, Jason Bass, Justin Turner, Jimmy “Slick” Barton, Rex Neil and Rusk County Go Texans Committee. In lieu of flowers, memorials may be made to the Rusk County Go Texans, 3975 Highway 79 E, Henderson, TX, 75652.

Services for Ronald Day Yandle, 66, of Henderson, will be held at 1:00 p.m. on Wednesday, July 21, 2021, in the chapel of Rader Funeral Home in Henderson with Danny King officiating. The family will receive friends from 12:00 p.m. until service... View Obituary & Service Information

The family of Ron Yandle created this Life Tributes page to make it easy to share your memories.

Services for Ronald Day Yandle, 66, of Henderson, will be held...

Send flowers to the Yandle family.