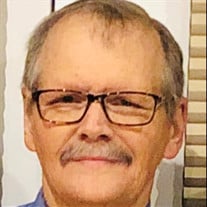 Roger Dale “Jake” Jacobus Jr., 66, passed away on November 23, 2021, after a battle with liver failure. Dale was born on September 8th, 1955, to Roger Dale Jacobus and Grace “Mitzi” Jacobus in Odessa, TX. Shortly after birth, Dale and his family moved to the Longview area. Dale graduated from Longview High School in 1974 and completed some schooling at Kilgore College before beginning his career as a Manufacturing Inspector. His career took him many places, most recently serving as an Inspector for mining parts at Komatsu Inc. Throughout childhood and adulthood, Dale spent a lot of his time at the family farm bailing hay and raising cattle. Dale enjoyed fishing, playing golf, working on cars, and spending time with his family. Dale deeply loved the family farm, working with everyone from his grandfather, father, and children there throughout life. He was always a dedicated church-goer, most recently attending small groups and serving as a greeter at Grace Creek Church. Throughout his life, Dale served as a source of unconditional love for his entire family. He was the type of father, son, and brother that would always put others before himself. Dale is survived by his son Chris Jacobus and wife Ashley Jacobus; daughter Megan Davis and husband Ryan Davis; son Trevor Jacobus; sister Laura Jacobus; sister Grace Jacobus; grandchildren Nikolas Jacobus, Andrew Jacobus, Carson Jacobus, Nellie Davis, Peyton Roberts, and Paisley Roberts. A public visitation will be held Friday, November 26th at Rader Funeral Home in Longview from 5 to 7 PM. Funeral services will be held Saturday, November 27th at Rader Funeral Home at 2:00 PM. An online guestbook may be signed at www.raderfh.com

The family of Roger Dale "Jake" Jacobus Jr. created this Life Tributes page to make it easy to share your memories.

Send flowers to the Jacobus family.