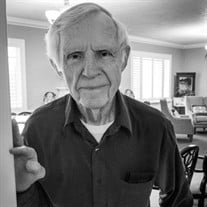 Dr. Robert Trabue Terrell passed from this life into the arms of his Lord and Savior Jesus Christ on January 13, 2022, at the age of 94. Dr. Terrell was born on March 6, 1927, in Houston to George Henry Terrell and Alice Abernathy Terrell. On his 18th Birthday, young Robert enlisted in the Army in the hopes of helping to defeat the enemies of the United States in WW II. However, the war ended before he saw combat. After being honorably discharged from the armed forces, he attended Texas A&M University where he served in the Corps. It was there while a senior that he married his sweetheart, Kathleen Ligon. Upon graduating with a DVM (Doctor of Veterinary Medicine) he practiced briefly in Paris, TX, and then moved to Longview where he would own his own practice for the remainder of his working years. He was a loving and faithful husband, father, grandfather and great-grandfather and was passionate about his love for his Lord Jesus and His church, serving at his passing as Elder Emeritus of First Christian Church of Longview where he was also a lifelong member of the choir. During the 1960s and 70s, he was quite involved in local musical theater and passed on a love of performing to all his children. He loved and studied nature, most notably birds, deer, and trees. He believed in and strove for racial reconciliation and served for many years as a volunteer at Good Shepherd Hospital. In addition to his parents, Robert (Bob) was preceded in death by his first wife Kathleen (Kathy), the mother of his children, his beloved stepmother Ruth (Mama Ruth), his brothers: George Allen and Henry (Hank), his sister Dorothy Elizabeth (Betty), his son Stephen and his grandson Emmanuel. He is survived by wife of the last 26 years - Patricia (Pat), his sister Sandra Lewellen, four sons: George, Paul, Mike and Russell, 13 grandchildren: Shiloh Norton, Christoph Terrell, Ariana Evans, Mari Carmen Kennedy, Jonathan Terrell, Michelle Evans, Tyler Terrell, Adam Terrell, Amy Starnes, Tristan Mills, Allison Nuernberg, Elijah Terrell, Lee Terrell and 21 great-grandchildren. Visitation will be from 3:00 to 5:00 PM Sunday, January 16, 2022, at Rader Funeral Home, 1617 Judson Rd., Longview, TX 75601. Service will be held at 2:00 PM on Monday, January 17th, 2022, at First Christian Church, 720 N 6th St., Longview, TX 75601 followed by the burial service at Rosewood Park Cemetery, 1884 FM 1844, Longview, TX 75605. While flowers are welcome, the family would humbly encourage you to consider a donation in his name to First Christian Church.

Dr. Robert Trabue Terrell passed from this life into the arms of his Lord and Savior Jesus Christ on January 13, 2022, at the age of 94. Dr. Terrell was born on March 6, 1927, in Houston to George Henry Terrell and Alice Abernathy Terrell. On... View Obituary & Service Information

The family of Robert Trabue Terrell created this Life Tributes page to make it easy to share your memories.

Dr. Robert Trabue Terrell passed from this life into the arms...

Send flowers to the Terrell family.