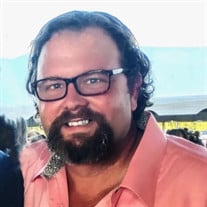 Robert John Petty passed away on September 6, 2021, leaving a legacy of love and laughter that will forever be cherished by his family and friends. Robert was born March 11, 1974 in Pasadena, Texas to John Elton Petty and Linda Beene Petty. He grew up in Longview and graduated from Longview High School in 1992. Longview remained his home until his recent move to Austin, Texas. Robert’s pride and joy were his children, Tanner and Camille. Whether duck hunting with Tanner, watching Camille’s soccer games, or exploring the outdoors together, Robert always loved being with his kids and was quick to tell you about their most recent accomplishments. Robert was an avid outdoorsman and could build almost anything with his hands. Some of his most important memories were spending time with his father at “Estes” and with his grandparents in Gilmer, and playing guitar with his cousin Keith. Robert enjoyed cooking—always making up his own recipes—and considered himself a food connoisseur. He compiled a list of must-try restaurants and, in typical Robert fashion, built his own barbeque smoker from scratch. After moving to Austin, Robert found another talent in painting, and he loved sharing his artwork with friends and family. Robert’s German shepherd, Roxy, could be found by his side no matter where he went, which is another reason he loved living in dog-friendly Austin. To know Robert was to love him and to fall for one of his infamous practical jokes. He had the special talent of being able to pull off a stunt on the unsuspecting and the suspecting, and he always made sure—with that twinkle in his eye—that everyone knew about it. Robert made friends wherever he went and was always up for a good time, a quick joke, or a conversation about faith and family. He encouraged his children to seek God always. Robert was preceded in death by his father, John Elton Petty; grandparents, Elton and Frances Petty; grandfather, Bennie Beene; uncle, Harold Beene; and cousin, Keith McKinley. Left to cherish his memory are his mother, Linda Beene Petty; son, Tanner Lane Petty, daughter, Camille Renée Petty, their mother Renée English Stewart and their sister Caroline Stewart; grandmother, Francis Imogene Beene; sister and brother-in-law, Robin and Kyle Adams and their children Anna and Isaac; sister and brother-in-law, Laura and Brett Miller and their children Evelyn, Margot, and Georgia; aunt and uncle Susan and Steve Marrs; and cousins Josh Marrs, Michael Marrs, Stacie Petty Tomlin and Michael Petty. In lieu of flowers, please consider a donation to Furr Ever Pets Rescue at P.O. Box 443, Judson, TX 75660. A graveside service will be held Saturday, September 11th at 12:00 p.m. at Rosewood Park in Longview, with a visitation immediately following. Services are under the direction of Rader Funeral Home of Longview. A memorial guestbook may be signed online at www.raderfh.com.

Robert John Petty passed away on September 6, 2021, leaving a legacy of love and laughter that will forever be cherished by his family and friends. Robert was born March 11, 1974 in Pasadena, Texas to John Elton Petty and Linda Beene Petty.... View Obituary & Service Information

The family of Robert John Petty created this Life Tributes page to make it easy to share your memories.

Send flowers to the Petty family.