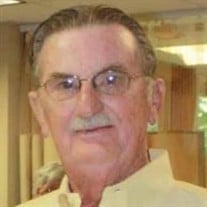 Mr. Robert M. Henderson, a devoted Christian, husband, father and Big Dad, was born on September 30, 1944 to the late Alton and Arcena Henderson in Jacksonville, TX where he was the youngest of 6 siblings. Bob joined his heavenly father from his home surrounded by his loving wife and family on September 27, 2021. Bob honorably served his country for 22 years in the US Navy and rose to the rank of Chief Petty Officer. Upon retirement in 1984 he then served in the fleet reserve for 8 years. Bob moved his family back to East Texas in 1988 and went to work for Fiberglass Specialties where he was Vice President for 22 years. Bob is survived by his loving wife of 46 years, Sue Henderson; his daughter, Cinny Pike and her husband Jason of Henderson; three grandsons, Brennon Henderson,who is stationed on the USS Roosevelt in Bremerton, WA, Dustyn Pike of McKinney, TX and Caleb Pike of Henderson. His son’s fiance, Amy Anderson and her four daughters Jordan, Jerilyn, Kaitlyn and Maddy Anderson all of Carthage. He is preceded in death by his son, Jared Henderson, who passed away on September 21, 2021. Bob was a member of Calvary Baptist Church, serving on the welcoming committee. Bob loved his church and strived to live his life according to God’s word. He started each day by reading his Bible. He was also a member of the Shriners where he enjoyed participating on the mini hot rod team. Bob was a member of the Masonic Clinton Lodge #23 where he bonded with a like minded group of dedicated men that he revered as brothers and served as Worshipful Master. Bob was a devout Christian that always put God and family first. Throughout his 22 year battle with cancer he always kept a great attitude and never questioned God’s purpose. He was an inspiration to all those that came in contact with him and never failed to help those in need. He will be deeply missed by his family, friends and all those that knew him. Big Dad you are so loved beyond any words that could ever be expressed. We will be reunited again one day; until then, know your legacy will live on through the family you raised and those that your life and your Godly example inspired. His brothers in Christ, Tim Ashmore, Dwayne Miley, Dwayne Pirtle, Phil Stanley, Stephen Strong and Jim Young will serve as pallbearers. Honorary pallbearers are Kelly Hall, Rocky Hall, Chris Potts, Donnie Powers, Bob Richardson, Dusty Flanagan, Joe Mark Strong, John Waldie and all members of Clinton Lodge #23. Bob will have a celebration of life and heavenly rebirth at 2:00 in the Chapel of Rader Funeral home on Saturday, October 2, 2021 with a Military burial at Lakewood Memorial Cemetery in Henderson, Texas officiated by Frank Lane and Dwain Knight. Visitation will be at 1:00 on October 2, 2021. The family wants to thank D. Neeraj Sharma and staff and Dr. Bernard Taylor ands staff for all their dedicated care they gave to Bob for so many years. In lieu of flowers, the family asked for donations to be made to St. Judes and Shriners Children’s Hospital, two causes close to Bob’s heart.

Mr. Robert M. Henderson, a devoted Christian, husband, father and Big Dad, was born on September 30, 1944 to the late Alton and Arcena Henderson in Jacksonville, TX where he was the youngest of 6 siblings. Bob joined his heavenly father from... View Obituary & Service Information

The family of Robert M. "Bob" Henderson created this Life Tributes page to make it easy to share your memories.

Send flowers to the Henderson family.