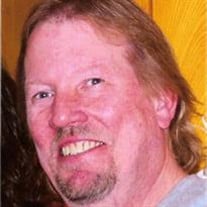 Richard Bryant Strickland Born on March 30, 1955, Richard Bryant Strickland left this earth for his heavenly home on December 5, 2010. He suffered a heart attack and cerebral hemorrhage. He was the son of Billy Bryant Strickland and Eloise Jacobs Strickland, both of whom predeceased him. He is survived by his son and daughter-in-law, Michael and Vanessa Walker, and his grandson, Graham Walker of Ft. Worth, Texas. He is also survived by his sister and brother-in-law, Nancy and Norman Rittenberry of Duncanville, Texas; and brother and sister-in-law, Allen and Tina Strickland, of Longview, Texas; and sister and brother-in-law, Jamie and Michael Austell of Longview, Texas. In addition, he leaves behind a nephew, John Rittenberry, of Dallas, Texas, and two nieces, Emily Ross of Longview, Texas, and Taylor Quinn of Cedar Hill, Texas. Lastly, Richard leaves behind saddened friends and co-workers, several of whom heroically performed CPR on him, for which his family is sincerely grateful. Richard graduated from Pine Tree High School in 1973 and married Betty George that same year. They enjoyed a 13-year marriage that produced the greatest source of pride in Richard's life-his son Michael. Richard lived in Longview virtually his entire adult life. He was employed as a foreman by Patterson Manufacturing Company, where he had worked for the past 23 years. Richard was a gifted carpenter and leaves behind many examples of his craftsmanship for his family to treasure. One his greatest joys was hunting with his brother Allen. He was an avid fan of NASCAR racing for many years, and most recently he treasured every opportunity he had to spend time with his grandson Graham. Richard was a down-to-earth, humble man who held himself above no one. He found great joy in the simple pleasures of life. He was an intelligent and quiet man with a keen sense of humor. Richard loved unconditionally, and was truly a peacemaker at heart. He will be missed by so very many. Richard's legacy will live on in the donation of organs and tissues that he left for others. Visitation will take place on Wednesday, December 8, 2010, from 6:00 8:00 p.m. at Rader Funeral Home, Longview, Texas. A graveside service will be conducted on Thursday, December 9, 2010, at 2:00 pm at Haven of Memories Cemetery, Canton, Texas. The family requests that any donations be made to either Habitat for Humanity or the American Heart Association.

The family of Richard Bryant Strickland created this Life Tributes page to make it easy to share your memories.

Send flowers to the Strickland family.