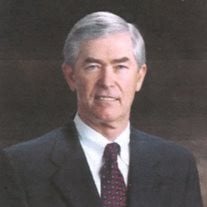 A celebration of life of Richard Andrews, 70, Longview, will be held at 11 am February 13, 2014 at Greggton United Methodist Church, Longview, with a visitation the hour prior. Mr. Andrews lost a seven year battle with cancer on Sunday. He was active in the manufacturing industry and the local community. Richard was born in Olney, IL in 1944 to Benjamin and Jane Andrews, and was raised in Vincennes, IN. He received a Bachelor of Science degree from Indiana State University and studied for an MBA degree from Butler University. He worked in industry in Indiana, Ohio, Kansas, Virginia, North Carolina, and Texas for forty one years. He and his wife moved to Longview in 1996 to join Stemco, where he became president and remained until retiring in 2007. Also, he was division president of EnPro Industries, Inc., Charlotte, NC, the parent corporation of Stemco. He was active in many associations of the heavy duty truck industry. In 2012 he was inducted into the Hall of Fame of the Heavy Duty Truck Industry, and in 2013 he was selected as distinguished alumni for Vincennes, IN Lincoln High School. Locally he served on the board of directors of Longview Economic Development Corporation for five years and was board president for two years; also he served on the Longview Chamber of Commerce for three years. He was a member of Greggton United Methodist Church, Welmaker JOY Class and Pinecrest Country Club. His hobbies included golf and physical fitness, in addition to remaining active in business as a management consultant and board member of several corporations. Richard was a loving husband, father, grandfather, and friend to all. He is survived by his wife of 23 years, Nancy Andrews; his daughter and son-in-law, Amy and Jason DeWitt of Westfield IN, and grandchildren, Grant, Olivia, Rachel, and Natalie; his son and daughter-in-law, Craig and Irma Andrews of Whitestown, IN and grandchild, Sophia; his brother Raymond Andrews and family of Pittsboro, NC; sister Linda Andrews of Terre Haute, IN; brother Jeff Andrews of Terre Haute, IN; brother Patrick Andrews of Vincennes, IN; and brother Dan Andrews of Somerset, KY; step sons Scott Thomas and family, Richmond, VA, and Brett Thomas and family, Roanoke, VA; aunt and uncle Karen Sue and Joe Clow of Olney, IL; and aunt Mary Ellen Smith of Olney, IL. He was preceded in death by father, Benjamin Andrews, his mother, Jane Andrews, and brothers, Mike Andrews and Mark Andrews. The family would like to express special appreciation to Dr. Lewis Duncan, Oncologist, Nurses and staff of Texas Oncology, Longview Cancer Center and Baylor University Medical Center, Dallas, TX. Memorial contributions may be made to the Greggton United Methodist Church, or the Longview Cancer Center, where he received care for many years, in Richards’s name.

A celebration of life of Richard Andrews, 70, Longview, will be held at 11 am February 13, 2014 at Greggton United Methodist Church, Longview, with a visitation the hour prior. Mr. Andrews lost a seven year battle with cancer on Sunday.... View Obituary & Service Information

The family of Richard Andrews created this Life Tributes page to make it easy to share your memories.

A celebration of life of Richard Andrews, 70, Longview, will...

Send flowers to the Andrews family.