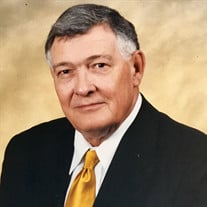 Rex Alton Nichols, Sr. passed away the 13th day of March 2018 after a brave battle with cancer. Rex was born January 8, 1938 in Olney, Texas and was the only child of Sam and Jewel Nichols. He was raised in Throckmorton, Texas until he was twelve, at which time the family moved to Austin, so their beloved son Rex would have better opportunities to grow and develop. Rex’s father owned the Longhorn Barbershop located on Guadalupe Street, directly across from the University of Texas at Austin campus. While spending many days shining shoes at his father’s barbershop, Rex often dreamed of attending the university. In 1956, he finally achieved his goal and enrolled as a student and played basketball for UT. In 1957, he left Austin and attended one semester at San Angelo State Junior College where he also played basketball and the team won the National Junior College Championship in Hutchinson, Kansas. Rex returned to UT and, after his graduation, entered the University of Texas School of Law, graduating in 1962. That same fall, he moved his family to Rusk, Texas, where he began practicing law and eventually served as the city’s Mayor. In 1971, Rex and his family moved to Longview, Texas where he continued practicing law, opening his own private practice in 1977 which is still in operation today. During his 42 years of practice, there were countless demonstrations of his deep compassion for those who were suffering or in need, quietly helping them in meaningful ways to make their lives better. Rex is survived by his wife of 38 years, Latricia; his two sons, Rex A. Nichols, Jr. and wife Kimberly; Mark Tosh Nichols and Tish Walker; grandchildren Lauren Nichols Pipak and husband Stephen; Luke Nichols, Riley Nichols and Hunter Head; great-grandchildren Owen and Olivia Pipak; niece Michelle Recker and nephew Michael Holland; Mary Ann Nichols, the mother of his children; and his many beloved pets, Princess, Buddy Lee, Tyke, Jo Jo and Buck; as well as numerous family and friends. Also, the family wishes to express their gratitude and appreciation to Eva Marie Moore, Roberto Gaona and Dale Wallace for the love and care they have extended to Rex for many years. Services for Rex will be held at 10 am on Friday, March 16, 2018 at First United Methodist Church in Longview, Texas under direction of Rader Funeral Home. Private entombment will be at Rosewood Park Mausoleum. Because of Rex’s love for animals, in lieu of flowers, the family asks that you consider donations to the Longview Animal Care and Adoption Center, 303 H.G. Mosley Parkway, Longview, Texas 75604 or a charity of your choice.

Rex Alton Nichols, Sr. passed away the 13th day of March 2018 after a brave battle with cancer. Rex was born January 8, 1938 in Olney, Texas and was the only child of Sam and Jewel Nichols. He was raised in Throckmorton, Texas until he was twelve,... View Obituary & Service Information

The family of Rex Nichols Sr. created this Life Tributes page to make it easy to share your memories.

Send flowers to the Nichols family.