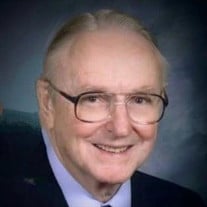 Dr. Raymond Lewis Etter,Jr., age 90, passed away February 6, 2022 surrounded by his loved ones. He was born August 10,1931, in Sherman, Texas. As a native Texan, Lewis loved the Texas Longhorns and his blood ran burnt orange. He earned his PhD in Chemistry from The University of Texas in 1956 and joined Texas Eastman in Longview that fall. After spending the first half of his 42 year tenure in Research and Development, Lewis became Quality Control Manager for the Polyethylene/Polypropylene Division, where he remained until his retirement at the end of 1997. Lewis was a lifelong Methodist and served First United Methodist Church of Longview for over 40 years as the volunteer director of the television ministry. As a quiet man who preferred to stand behind the spotlight Lewis used his technical skills as the lighting and sound director for the Longview Community Theater and served as its president for many years. His community service efforts dealt primarily with animals where he was the announcer for the Longview Kennel Club for years. In July of 1972, Frances and Lewis spearheaded the founding of the Gregg County Humane Society. Lewis was a also a member of the Hill City Masonic Lodge #456 in Austin, Tx for over 50 years. He is survived by his wife of 64 years, Frances Ann Tatum Etter; son Dr. Brad Etter and wife Kay of Conroe; daughter Evelyn (Lyn) Etter Thiessen and husband Bill of Longview; 8 grandchildren, Ray Etter and wife Janna; Meredith Hines and husband Jerrod; Stephanie Adams and husband Blake; Steven Etter and fiance Nicollette; Christie Pickel and husband Donnie; Tori Chambers and husband Drew; Debbie Mosciano and husband Mike; Matt Thiessen and wife Amy; 13 great-grandchildren Brooke, Alexa, and Colt Hines; Avery, Easton, and Emerson Adams; Oliver Etter; Anna and Leigha Mosciano; Michael, Aaron, Noah, and Chloe Thiessen; niece Angela Erck Fulcher, and nephew Marc Erck. He was preceded in death by parents, Raymond Louis and Thelma Siebert Etter Sr. ; and sister, Mary Helen Erck. Visitation is Saturday, February 12, 2022, at First United Methodist Church from 9:00 - 10:00 a.m. with a service following from 10:00 - 11:00 a.m. A graveside service will be held at Memory Park Cemetery immediately after the church service. In lieu of flowers, memorials may be made to the television ministry at First United Methodist Church of Longview or to the Longview Animal Care and Adoption Center.

Dr. Raymond Lewis Etter,Jr., age 90, passed away February 6, 2022 surrounded by his loved ones. He was born August 10,1931, in Sherman, Texas. As a native Texan, Lewis loved the Texas Longhorns and his blood ran burnt orange. He earned his PhD... View Obituary & Service Information

The family of Dr. Raymond Lewis Etter Jr. created this Life Tributes page to make it easy to share your memories.

Send flowers to the Etter family.