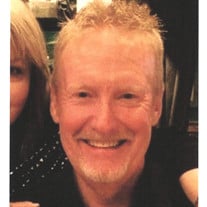 Randy Wyatt entered the arms of his Heavenly Father on August 26, 2021 at the age of 62. Though saddened by his departure, his family finds joy in the fullness of the life he led and his unwavering devotion to his Lord and savior, Jesus Christ. Larry Randall Wyatt was born in Killeen, Texas on December 10, 1958. His father led him to Christ at the age of 9, and Randy spent the rest of his life walking in his calling as an anointed musician, worship leader, and song-writer. He graduated with the Longview High School class of 1977 and recorded with The Mobberly Sensations. He later went on to attend Oral Roberts University, where he was a member of the chapel praise team. Randy’s musical talents opened doors to many opportunities that impacted countless lives and showcased his love for the Lord. He spent a decade traveling with The Continentals, performing in Africa, Germany, Australia, Israel, and numerous other destinations around the world. He also ministered at home, singing and playing guitar for many church worship teams throughout his lifetime He married the love of his life on May 17, 1997 and together, they shared two beautiful children. Later moving to Austin, Randy spent 10 years there raising his family and leading worship with several local churches. He also performed and ministered with The Fred Thomas Band which he dearly loved He eventually returned to Longview, where Randy embraced his new role of “Papa” to his granddaughters. Being their Papa was one of his greatest joys. His favorite pastimes included spending time with beloved family, watching movies, fishing, collecting watches, and cheering on the Dallas Cowboys and Texas A&M football Randy is survived by his wife Lesa Wyatt, daughter Lauren Bjork, son Luke Wyatt, granddaughters Zoey Bjork and Willow Oshodi, parents Larry and Betty Wyatt, sister Lisa Westbrook, brothers Lance, Kevin, and Kyle Wyatt, and many nieces and nephews. Also his mother-in-law Ginger (Gigi) Megason with whom he shared a very special relationship A private graveside service was held for immediate family at Rosewood Cemetery on Saturday, September 4, 2021, and a public celebration of life will be held on September 25 at 2:30 at Mobberly Baptist Church. Flowers will be received at Rader Funeral Home. In lieu of flowers, family support donations can be made to Lesa Wyatt in care of Pathway Church in Longview.

Randy Wyatt entered the arms of his Heavenly Father on August 26, 2021 at the age of 62. Though saddened by his departure, his family finds joy in the fullness of the life he led and his unwavering devotion to his Lord and savior, Jesus Christ. Larry... View Obituary & Service Information

The family of Randy Wyatt created this Life Tributes page to make it easy to share your memories.

Randy Wyatt entered the arms of his Heavenly Father on August...

Send flowers to the Wyatt family.