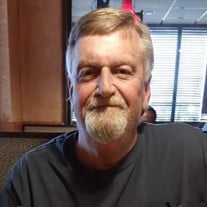 Graveside services for Randal Wayne Steelman, 66, Gilmer, will be 2 PM Monday, November 29, 2021 at the Mausoleum of Rosewood Park in Longview, TX with Pastor Carl Clark officiating. Visitation will be at the cemetery before the service. Randy Steelman was born on October 17, 1955 to his parents Ernest Wayne Steelman and LaJuan Hust Steelman, and passed from this life on November 16, 2021. He is married to Connie Clark Steelman. Randy grew up in the Dallas area and made many friends there. He was always interested in trying to figure out how mechanical things worked. His experience went from automobile technology, including owning a business and repairing vehicles. Later he studied computer science and was fascinated with the challenge it presented. Computer technology was something he was very interested in and he pursued a career in it at Longview Independent School district from which he later retired. He was of the Baptist faith and was always ready to share the gospel. He and Connie at one time had a jail ministry in Gilmer, TX. Randy is survived by his wife, Connie Steelman, a son, Dennis Wayne Wickert, a granddaughter, Kendal Marie Wickert both of Arizona, one brother, Marcus Layne Steelman of Gilmer, TX and his mother, LaJuan Hust Steelman, also of Gilmer. He was preceded in death by his father, Ernest Wayne Steelman, grandparents, Exie and Pete Steelman, and his maternal grandmother, Eunice Hust Herren along with many aunts, uncles and cousins. In leu of flowers please make a donation to your favorite charity in memory of Randy.

Graveside services for Randal Wayne Steelman, 66, Gilmer, will be 2 PM Monday, November 29, 2021 at the Mausoleum of Rosewood Park in Longview, TX with Pastor Carl Clark officiating. Visitation will be at the cemetery before the service. Randy... View Obituary & Service Information

The family of Randy Steelman created this Life Tributes page to make it easy to share your memories.

Send flowers to the Steelman family.