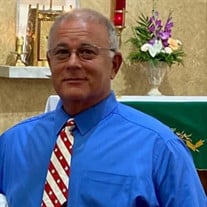 Our beloved patriarch, Phillip Joe Procell, arrived in Heaven on February 26, 2022. His tremendous battle with medical issues in recent months showed his admirable courage in facing life’s challenges. Despite the pain, Phillip stayed strong until the end, and came out a true hero. He was born on January 20, 1959, in Zwolle, Louisiana. He lived his life from the 1960’s on, and considered his home to be in Longview, Texas. As a graduate of Pine Tree High School, he was always partial to the Pirates. He met the love of his life, Tina, in 1980. They have been inseparable ever since. Tina supported his dream to open his own business every step of the way. While many small businesses fail, 36 years later, Procell’s Office Products and Trophies is still in open today. This is due in large part to Phillip’s magnetic and positive personality. His business’ motto was “Special awards for special people.” He never met a stranger and had the innate ability to make everyone feel like they were the most special and important person in the room. Phillip was a very strong Christian man. He attended every Catholic church in Longview because he enjoyed the people and fellowship of them all. He was a 4th Degree Member of the Knights of Columbus Organization. He loved to give all the glory to God in all that he did. He proudly told others of his strong faith whenever given the chance. Phillip loved watching all sports. He was a huge Texas Longhorn fan. He volunteered as a youth soccer coach and later commissioner for the GLSA for many years, impacting the lives of countless youth in our town. He volunteered to serve on site-based committees for the betterment of several local schools. He truly was a selfless person who received the most joy from helping others. Phillip is survived by his loving wife of 38 years, Tina Rizer Procell; daughter and son in law: Autumn and Dustin Cameron; daughter April Procell; son and daughter in law: Andrew and Kimberly Procell; grandchildren: Eli Procell, Cali Reynolds, Myra and Avery Morris, Adelyn, Whitley and Lyla Cameron, and Gabriella Procell: sister and brother-in-law Sandra and Kenneth Edney: sister-in-law Carol Procell, and nephews: Adam and Aaron Procell. He is preceded in death by his parents Noah, and Ruby Brandon Procell, and his brothers Donald and Ronald Procell. Phillip will be honored with the Recitation of the Rosary at Rader Funeral home in Longview on Wednesday, March 2nd at 6:00 P.M. with visitation continuing from 6:30 to 8:00. A family conducted Celebration of his Life will be on Saturday March 5, 2022, at 2 P.M. at St. Mary’s Catholic Church in Longview. In leu of flowers, donations may be made to the charity of choice.

The family of Phillip Joe Procell created this Life Tributes page to make it easy to share your memories.

Send flowers to the Procell family.