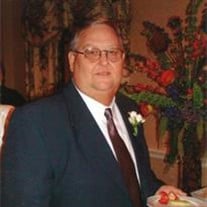 A memorial service for Arnold Paul Tucker, 67, of Longview will be held at 11 AM Saturday, February 23, at Woodland Hills Baptist Church in Longview with Brother Charles Hunt and Brother Bob Shirley officiating. A second memorial service will be held at 11 AM Monday, February 25, at Hainesville Baptist Church in Hainesville with Brother Terry Davis and Brother Ron Dyess officiating. Cremation arrangements are with Rader Funeral Home of Longview. Mr. Tucker passed away Friday afternoon in a local hospital. Paul was born on December 8, 1945 in Hainesville, Texas to A.J. "Buddy" and Joy Tucker. He was a graduate of the University of Houston and was retired from Tri County Electric in Hooker, OK, where he worked as an Operations Supervisor. He was a loving husband, father, and grandfather and will be missed by all who knew him. Paul was a member of Woodland Hills Baptist Church in Longview and was active in Rotary for 27 years. He was preceded in death by his parents, and his brother, Wayne Tucker. Those left to cherish his memory are his wife of 32 years, Mary Craig Tucker of Longview; his son Kevin Tucker of Rowlette, TX; his stepson, Stuart Hefner and wife Erika of Dallas, TX; his granddaughter Addison Hefner; his Mother and Father-in-law James and Dorene Craig of Longview; his brother and sisters-in-law Byron and Gloria Tucker of Eulus, TX, and Lee and Martha Downs of Hunt, TX. He is also survived by his step-mother Cliffie Tucker of Mineola, TX; his step-brother Ron and Janice Dyess of Hughes Springs, TX; his step-sister Cecilia Garrett of Mineola, TX; and many cousins and friends. In lieu of flowers, donations may be made to Woodland Hills Baptist Church Building Fund or Gideons Int'l. A memorial guestbook may be signed online at www.raderfh.com

A memorial service for Arnold Paul Tucker, 67, of Longview will be held at 11 AM Saturday, February 23, at Woodland Hills Baptist Church in Longview with Brother Charles Hunt and Brother Bob Shirley officiating. A second memorial service will... View Obituary & Service Information

The family of Paul Tucker created this Life Tributes page to make it easy to share your memories.

A memorial service for Arnold Paul Tucker, 67, of Longview will...

Send flowers to the Tucker family.