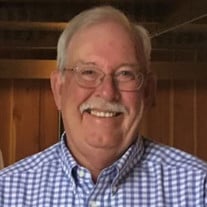 Paul Garner, 68, passed away January 29, 2022 after a three year battle with Idiopathic Pulmonary Fibrosis. The family will receive friends at Rader Funeral Home in Longview from 5 to 7 p.m. A celebration of life service will be held at Winterfield United Methodist Church in Longview, Texas on February 4 at 10 a.m. Burial will immediately follow at the Winterfield Cemetery. In lieu of flowers, donations may be made to Winterfield UMC Building Fund. Paul was born to Albert and Hazel Garner in Longview on July 21, 1953. He is survived by his wife of 48 years Susan Garner, daughter Patricia Garner, son Coleman Garner and wife Jessica, grandson Peyton Garner, and granddaughter Maddie Garner. He was the youngest of four children, Elsie Garner Osborne, Martha Garner Holler, and David Garner. He was preceded in death by father Albert Garner, mother Hazel Garner, and sister Elsie Osborne. He began working at the Longview News Journal at the age of 14 years old and eventually moved to the printing room as a pressman. He later moved to IBM where he worked for five years gaining experience as a typewriter repairman. At the request of his father-in-law Pat Durst, they started their own business, P & P Associates, where they serviced, repaired, and sold typewriters to many area businesses and schools. They bought Topp Office Supply where Paul was president of both businesses until he retired in 2018. Paul loved the outdoors and divided much of his time between his lake house on Caddo that his parents bought the year he was born and his Avinger deer lease. He spent many a morning and afternoon at these places watching the sunrises and sunsets. He enjoyed his time in the woods or on the lake with his son, grandson, and friends. One of his proudest moments was this past deer season getting to be there when Peyton, his grandson, shot his first deer. When he wasn’t at the lake, deer camp, or working in his shop or the yard, he was relaxing on a cruise ship with his wife Susan.

Paul Garner, 68, passed away January 29, 2022 after a three year battle with Idiopathic Pulmonary Fibrosis. The family will receive friends at Rader Funeral Home in Longview from 5 to 7 p.m. A celebration of life service will be held at Winterfield... View Obituary & Service Information

The family of Paul Garner created this Life Tributes page to make it easy to share your memories.

Send flowers to the Garner family.