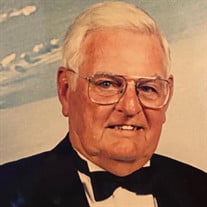 Paul was born December 14, 1930, in Grand Island, Nebraska and peacefully passed away on August 15, 2021, in Longview, TX. We were blessed with 90 and a half years of his great love for people and life. He grew up in Kearney, Nebraska and met his wife of 68 years, Alene, at a café in Lincoln while attending the University of Nebraska. Eight days after they married, Paul left for the Army during the Korean war. While he was stationed in Germany, Alene joined him during the last year of his service. With Alene’s family being German, this is when Paul fell in love with the people and the country of Germany. Upon returning from his Army service, he completed his master’s degree in music at the University of Nebraska (where he proudly led the Big Red Marching Band as the drum major) and taught band and choir in Newman Grove, Nebraska. Here they started their family with the births of Carmela and Mike. In 1963, they moved to Longmont, CO where Paul continued teaching and then began a career in financial planning. In 1974, Paul moved his family to Garland, TX to become a business owner and opened a Taylor Rental Center. He was a successful owner and employed his kids and many of their friends during his time owning the store. In 2000, Paul and Alene moved to their present home in Longview, TX to “never retire” as he worked for Carmela and Mark as the “Grandpa” of their businesses. So much can be said about Paul. A few highlights would be the 108 countries he traveled to and the love of people and friends he made along the way. This includes the Kreft family in Germany with the youngest being named Paula after him. He never met a stranger, just ask the employees at Sam’s club. He and Alene also showed their love for the Lord and others by taking in at least a dozen people to live with them throughout the years. These included: kids of friends, friends of their kids, friends of their grandkids, young people needing a break and a young family from Hong Kong who have been their friends for 40 years. Paul was Grandpa to his grandkids, Grandpa to his great grandkids, Grandpa to his neighbor’s kids, Grandpa to the workers at the office, Grandpa at AMBUCS, Grandpa to so many. He was a member at New Beginnings Baptist Church where he loved to sing in the choir and the congregation. He loved his life group and served by building ramps for the needy and feeding the men at the House of Disciples. Paul was extremely active as he was a Master Mason with the Masonic Lodge, past president of his Lions club, a part of the local American Legion, past president of Ambucs Too, Shriner’s drum corp., and church choir director at his former churches. Paul loved people well! He is survived by his wife Alene of 68 years, daughter Carmela Davis and husband Mark Adkisson, son Mike Davis and wife Michelle, grandchildren: Kyle Adkisson, Brooke Davis, Stephan Tarpley and wife Abigail, Kent Adkisson, Adrian Tarpley, Tyler Davis and wife Mary Page, Mary Margaret Jones and husband Jon, Trevon Goodman and girlfriend Madison Perrett, and Kenton Goodman. Great grandchildren: Ava and Avery Adkisson, Piper and Myla Adkisson, Hayes and Wren Davis. So many other family members as well as friends. Visitation for Paul will be held Tuesday the 17th 5:00 – 7:00 p.m. and a memorial service Wednesday the 18th at 10:00 a.m. both at the Rader Funeral Home in Longview. A second service and burial will take place in Dubois, Nebraska later in the week. In lieu of flowers, donations can be made in his honor to Longview Ambucs Too, PO Box 331, Longview, TX 75606.

Paul was born December 14, 1930, in Grand Island, Nebraska and peacefully passed away on August 15, 2021, in Longview, TX. We were blessed with 90 and a half years of his great love for people and life. He grew up in Kearney, Nebraska and met... View Obituary & Service Information

The family of Paul Davis created this Life Tributes page to make it easy to share your memories.

Send flowers to the Davis family.