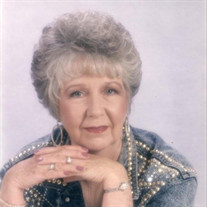 Patricia Ann Holiday Gunby at the age of 79, passed away peacefully at Regional Hospital in Longview. Patricia Ann Holiday Gunby (Pat) was born on May, 23 1942 in Longview, Texas. Her parents were John T (Jake) Holiday and Adell Elizabeth Hillin, Holiday. Pat loved her parents dearly. She always had a special bond with her mother. Pat grew up in East Mt where she also attended school. At school as well as living in the East Mt. community she acquired a lot of classmates and friends who ended up lasting a lifetime. Pat had three sons, Dwayne, Dwight and Darwin, whom meant the world to her. Pat enjoyed doing ceramics with her mother where they made an assortment of dishes and whatknots . Pats love of ceramics ventured to making dolls which she gave each detailed individuality. Pat also loved flowers, plants and gardening. Pat became a Christian early in life. During her later years, she repented of her sins and rededicated her life to our Lord. She did home studies in her bible and asked questions and spoke of HIM often. Pat was preceded in death by her father John T (Jake) Holiday and her mother Adell Elizabeth Hillin, Holiday. She leaves behind three sons, Doyle “Dwayne” Brown and wife Judy Hunter Brown, David “Dwight” Reynolds and wife Gail Goswick Reynolds and Douglas “Darwin” Gunby and wife Victoria Nissen Gunby, 7 Grandchildren, Whitney and Dustin Brown, Brandon and Brian Reynolds, Clay and Dakota Gunby, also 7 Great Grandchildren, Gracie, Skeet, Laney, Kylee, Baine, Bailon, Wylie D and a host of cousins, nephews, nieces, other family and friends.

The family of Patricia Ann Gunby created this Life Tributes page to make it easy to share your memories.

Patricia Ann Holiday Gunby at the age of 79, passed away peacefully...

Send flowers to the Gunby family.