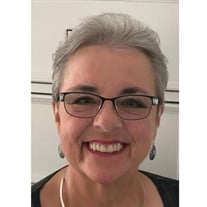 LONGVIEW, TX - Pam Anne Benson, age 66, of Longview, Texas passed into the arms of her Savior in her home on Tuesday, December 7, 2021 at 12:15am. She was born September 5th 1955 in Preston, England to parents Maurice & Joan Cushion. She attended Winckley Square Convent Grammar School for Girls and Preston College to train as a hairdresser. On March 27 1974 she married the love her life David. In May 1981, they both gave their lives to the Lord at a Second Chapter of Acts Concert. From there the couple were called into a life of service to their Savior and His people. Dave and Pam took their children to serve on the mission field in Ghana, West Africa in 1986. In 1987 they started the Bride Community Church in Leigh, Lancashire, UK. The little church that began as a small gathering in a friend’s living room eventually became King’s Park Christian Center. King’s Park was known as a place where many came to find new life in Christ, hundreds gathered for worship and community was built. Mrs. Pamela was always at the center of the activity with a ready smile and an encouraging word. Traveling the British Isles, she vested herself into her passion of helping women and children through inspiring Women’s ministries to start more than 70 Pregnancy Crisis Centers. She eventually became NW regional director for Assemblies of God Women’s Ministries. In 1997, Pam joined Dave in a new adventure when together they came to pastor Cornerstone Church, later known as Grace Creek in Longview, TX. Longview firmly became her home. In Longview Pam continued to lead women’s ministries, inspire others in worship, encourage the broken hearted and spur the church into good works. Never judging others she found friends in every part of the community. Ministries she has loved and served include Longview Pregnancy Crisis Center, House of Hope, Hwy 80 Rescue Mission, and Made to Love Ministries. More recently as her health began to fail, she never gave up serving Jesus and showing His love to others. Turning whatever she had in her hand to serve the Lord she led a small group of ladies in crocheting, making blankets and backpacks for the homeless. Mrs. Benson was preceded in death by her parents, Joan and Maurice Cushion of Chorley, England. She is survived by her loving husband, David Raymond Benson of Longview TX and her three children Nicola Lawrence and son in law Reno Lawrence of Lewisville, TX, Matt Benson and his wife B. Benson of Longview, Texas and Stephen Benson and his wife April Benson of Longview, TX. And her grandchildren: Elisabeth Greene, Maxwell Benson, Alissa May, Lexi Benson, Luciana Greene, Jackson Greene, McCade Benson, Harrison Greene, Tyler Benson, Christopher Benson Thursday, December 9 at 2:00pm a viewing will be held at Grace Creek Church in Longview TX followed by a celebration of life service at 3:30pm. Serving as Pallbearers will be Matt Benson and Steve Benson, Maxwell Benson, Jackson Greene, McCade Benson, a Harrison Greene, Tyler Benson and Reno Lawrence In lieu of flowers, the family suggests memorial contributions be made to House of Hope. http://ahopeforwomen.org/

LONGVIEW, TX - Pam Anne Benson, age 66, of Longview, Texas passed into the arms of her Savior in her home on Tuesday, December 7, 2021 at 12:15am. She was born September 5th 1955 in Preston, England to parents Maurice & Joan Cushion. She... View Obituary & Service Information

The family of Pam Benson created this Life Tributes page to make it easy to share your memories.

Send flowers to the Benson family.