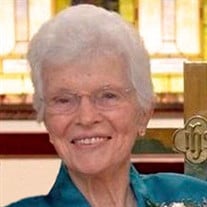 Nancy Mackey June 15, 1931 – April 27, 2021. Nancy Ruth Rountree Mackey of Longview, Texas, died peacefully late Monday, April 26, the culmination of a life lived with passion and vitality. She loved mightily and served discreetly. She was irrepressible, energetic, resilient, competitive, loyal, and principled. She was both demanding coach and patient teacher. To know her was to believe you were special to her. Born in 1931, Nancy grew up in Elysian Fields, Texas, daughter of schoolteacher Nina McLaurin Rountree and bank cashier, Yancey Rountree. An only child, she often got scolded for leaving the yard to find playmates. As she grew, she developed close relationships with extended family and neighborhood kids. Her cousins Betty Hill (Vaughan) and Margie Hill (Tompkins) were the closest thing to sisters. She felt the call of duty when the war arrived and signed up to log aircraft that passed over town. She could identify every model of bomber that flew out of nearby Barksdale Field by its shape. She made her parents stand when the Star Spangled Banner played on the radio. Nancy was a cheerleader and multi-sport athlete in high school. She played guard for the Yellow Jackets’ basketball team wearing wartime hand-me-down shoes and uniforms. The town pooled gas rationing coupons for their road games. Once, the bus broke down and the players had to push it from Karnak to Marshall. She loved the competition and for the rest of her life, she could say the name of rival Waskom High as an expletive. She graduated valedictorian and, since Texas A&M didn’t take women, attended Austin College in Sherman. She developed her love of singing in the famous Austin College A Cappella Choir and travelled the country with them, performing at such places as Radio City Music Hall. She graduated with honors and group of lifelong friends from Coffin Dormitory. Finding work in Longview, Nancy met her future husband the summer of 1951 at Presbyterian Camp Gilmont. The son of one of the camp’s founders, Bill Mackey (an Aggie) was a counselor that year. He was shy but not too shy to make sure they sat together at the evening prayer service. He would later confess that he was especially attracted to her because “she could throw a softball like a boy.” Nancy had a lifelong love of Camp Gilmont, volunteering countless hours of work and serving on the camp’s board for many years. Gilmont honored her with their Arbor Award in 2017 for her lifetime dedication. Bill and Nancy corresponded through his combat service in the Korean War and wed in Elysian Fields, December 20, 1953. Sons David and Scott were born in November 1954 and December 1956. An only child, Nancy wanted a big family, but practicality led them to try just once more, for a girl. The only name Nancy had picked out was Lauren. Curtis was born April 20, 1963. Nancy began her teaching career in Tyler, in 1953. After the first two sons were born, she taught English and phys-ed and coached girls sports at Judson High School. She would fill similar roles at schools in Houston and Austin, picking up a M.Ed. degree from the University of Houston as part of her career development. A successful coach, she won the first ever district championship in any sport at Austin’s Westlake High School, guiding the girls’ volleyball team to the playoffs in 1972. Her volleyball teams were regular playoff contenders at Humble High School near Houston where she negotiated freeways as head coach and bus driver to road games. As a teacher, and later a school counselor, Nancy helped capable students reach their goals and inspired the troubled to expect more from themselves and from their lives. Dozens of former students will testify that a course correction she helped them make had an enormous lasting impact. In retirement, Nancy and Bill had the opportunity to travel. They made it to every state in the union at least once and visited many countries in Europe and the Middle East. Nancy was devastated by Bill’s sudden death in 1995 but refused to let it overcome or isolate her. She enjoyed close friendships with other unmarried women that could drop what they were doing for an adventure. In recent years, her dear friend Charyl Palsha has been Nancy’s traveling buddy and partner in mischief. They loved the Rockies and had virtually a second home in Hawaii, visiting seven times. Nancy hiked the mountains, kayaked the rapids, and soared along ziplines into her eighties. She adored her grandchildren and they all loved being spoiled for a week at “Camp Nana.” What happened at Camp Nana, stayed at Camp Nana. Nancy was a lifelong Presbyterian, baptized at the Golden Rule church in Elysian Fields. With her love of music, you’d usually find her singing alto in the choir loft, or ringing with the bell choir. In nearly 40 total years as member of Alpine Presbyterian in Longview, she taught youth bible study, supported women’s circle, and served many terms as deacon and elder, often as worship chair. Nancy was preceded in death by her beloved husband of 42 years, Bill Mackey, and by daughter-in-law, Janet Woodyard Mackey. She is survived by her three sons, daughters-in-law Ann Dillahunty Mackey and Diana Hudson, and five grandchildren: David Webber (wife Laura) of Austin, Ross Mackey of Austin, Matthew Mackey (wife Katelyn) of Lake Jackson, Texas, Mark Mackey of College Station, and Reagan Mackey of Tyler. Special thanks to the staffs at Buckner Westminster Place, Longview Regional Hospital, and HeartsWay Hospice. Memorial contributions may be made to Camp Gilmont (www.gilmont.org), 6075 State Highway 155 North, Gilmer, Texas 75644 or to Alpine Presbyterian Church, 135 Hiett Lane, Longview, Texas 75605.

The family of Nancy Mackey created this Life Tributes page to make it easy to share your memories.

Send flowers to the Mackey family.