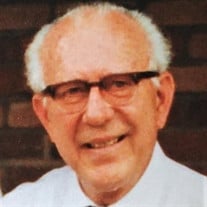 Morris Robert Hoffer, age 90, known to family and friends as "Bob", passed away on May 21, 2012 at the Washington Veteran’s Home in Port Orchard, Washington. Bob was born in Mesa, Arizona on November 7, 1921, the son of Morris and Ferol Hoffer. His mother died not long after his birth. He grew up with his father and stepmother, Elena Hoffer, in southeast Kansas. Bob married Wilmetta Irene Berry on May 28, 1945 in Columbus, Kansas. Bob and Irene lived in Longview, Texas from 1961 to 2001. He was a graduate of LeTourneau College in Longview and worked as a lithographer for the college and later for East Texas Litho. His favorite hobbies were writing stories, having coffee with good friends and bowling. He was an active member and usher of the Oakland Heights Baptist Church and made many good friends there. Bob was passionate about injustices to the elderly, young and helpless; and his letters expressing these thoughts were frequently published in the Longview News Journal. Bob and Irene moved to Washington State in 2001 to be near their children. He entered the Veteran’s Home in August 2002 and received much love and care from the wonderful staff and friends that he knew there. His favorite pastime was calling and keeping in touch with family and friends back in Texas. Bob's loving wife, Irene, followed him in death in 2021 in Bremerton, Washington. His brothers, Earl Hoffer of Pampa and Lee Hoffer of Temple, have also passed away. He is survived and missed by his son and daughter, Bill Hoffer of Las Vegas and Patricia Hoffer of Seattle. Bob was proud to have served his country during WWII in the Navy’s Pacific fleet. He served, also, in the Navy during the Korean War. A Memorial Service was held for him at the Washington Veteran’s Home on Memorial Day, May 28, 2012. That day would have been Bob and Irene’s 67th wedding anniversary. A graveside service for Bob and Irene will be at Rosewood Park Cemetery on Wednesday, October 20, 2021 at 2:00 PM.

Morris Robert Hoffer, age 90, known to family and friends as "Bob", passed away on May 21, 2012 at the Washington Veteran&#8217;s Home in Port Orchard, Washington. Bob was born in Mesa, Arizona on November 7, 1921, the son of Morris and Ferol... View Obituary & Service Information

The family of Morris Robert Hoffer created this Life Tributes page to make it easy to share your memories.

Morris Robert Hoffer, age 90, known to family and friends as...

Send flowers to the Hoffer family.