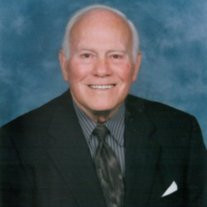 Milton Luther Belflower, 87 after a long and courageous struggle with Parkinson’s disease, went to be with the Lord December 15, 2013. Visitation will be in the Chapel of Rader Funeral Home in Henderson, TX on Wednesday, December 18, 2013 from 1pm to 2pm, with services immediately following. Brother Frank Vaughn and Brother Frank Lane will officiate. He was born April 15, 1926 in Tifton, Georgia. An enjoyable first work experience was with a movie theater. He faithfully served our country in the Pacific, World War II and was Honorably Discharged from the United States Navy Radioman Third Class, in May of 1946. He moved to Longview, TX; met Patsy Ruth Miller whom he married Christmas Day, 1950, attended LeTourneau Technical Institute; and joined First Baptist Church Longview where he became an active member. After leading the printing department at LeTourneau College and earning a Masters degree at East Texas State College, Milton was selected to start the printing department at Kilgore College from where he retired in 1986. During retirement he enjoyed serving in the Literacy Council in Longview helping others learn to read and write. His dream was to raise a family on a farm while teaching printing and serving in his church. He accomplished his dream. He is survived by his wife of 62 years, Patsy Belflower, his mother Bertha Lee Belflower, 106 years old; his brother Kenneth Belflower both of Bartow, Florida; his children Ken (Susan) Belflower; Stephen (Sue) Belfower; Edmund Belflower; Spencer Belflower; Tina (John) Tanguma and his nine grandchildren and four great-grandchildren. His father, George Irmon Belflower; his father and mother-in-law, Mr. & Mrs. M.M. Miller; his daughter-in-law, Pam Belflower, and his grandsons, Stephen Belflower Jr. and Daniel Belflower, precede him in death. In lieu of flowers donations may be made to: Kilgore College Foundation ATTN: Milton L. Belflower Scholarship 1100 Broadway Kilgore, TX 75662-3204

Milton Luther Belflower, 87 after a long and courageous struggle with Parkinson&#8217;s disease, went to be with the Lord December 15, 2013. Visitation will be in the Chapel of Rader Funeral Home in Henderson, TX on Wednesday, December 18,... View Obituary & Service Information

The family of Milton L. Belflower created this Life Tributes page to make it easy to share your memories.

Milton Luther Belflower, 87 after a long and courageous struggle...

Send flowers to the Belflower family.