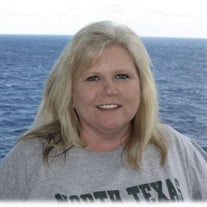 Melanie “Dianne” Dorsey Melanie “Dianne” Dorsey, 57, of Longview, Texas went to be with our Lord and Savior on Monday, November 8, 2021, after fighting a long hard battle. She was born on April 30, 1964, in Houston, Texas to the late Barbara Gooch and the late Albert Gann.   Dianne was a nurturing person and was loved by all who met her! She will be remembered for her love for the Lord and her love for music. She had a true passion for gospel music and would certainly share with someone if they were singing off key or on the wrong part. She never met a stranger and would find any way that she could, to speak of her Lord. Whatever struggle she faced, her faith in the God provided her strength to overcome. She brought light, love and joy to the lives of others but one of her greatest joys, was her grandchildren. She was the greatest Nannie that they could ever ask for. Not only was she the best Nannie, but she was also the fun-loving Aunt Di to her many nieces and nephews and all the other kids she claimed as her own.    She was preceded in death by her parents, Barbara Gooch and Albert Gann, step-father, Bob Gooch, her brother, Jody Gooch, and her brother-in-law, Darrell Ward.   She is survived by her husband of 12 years, Marlin Dorsey; Children, Samantha Gebhardt, Marlana Butler and husband Ryan, and Judson Dorsey and wife Sonia; grandchildren Kylee Gebhardt, Taylor Goss, Judson Dorsey II, Emerson Dorsey, Olson Dorsey, Brynson Dorsey, Bailee Butler, and Cole Butler. She is also survived by her brothers Darryl and wife Pam, Ernie and wife Judi, David and wife Laurie, James and wife Danna; and sisters Shirley, Darlene and Brenda and husband Johnnie, and sister-in-law, Jackie.   A celebration of life will be held Monday, November 15, 2021, at 11:00 am, at Macedonia Baptist Church, with interment following at Lakeview memorial Gardens. Visitation will be Sunday, November 14, from 5:00pm – 8:00 pm at Macedonia Baptist Church.   In lieu of flowers, the family requests that donations be made to the Dianne Dorsey fund at Austin Bank.

The family of Melanie "Dianne" Dorsey created this Life Tributes page to make it easy to share your memories.

Send flowers to the Dorsey family.