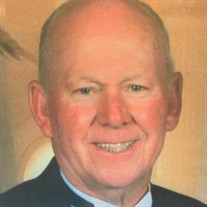 Max Eugene “Gene” Marrs joined his wife, Olene, and his daughter Cindy, at God’s side. Gene was born in Norman, Oklahoma on July 21st, 1934. Gene was one of 7 children who were raised by the late Samuel and Beatrice Marrs. They were raised in a home always filled with laughter and joy; and Gene lived his life the same way. Gene had 4 great loves in his life. The 1st of these was his Lord. He was raised the grandson of a Church of Christ preacher, and was a devoted member of the Church his whole life. He was blessed to spend many years worshipping with Marvin Phillips at Garnett Road Church of Christ in Tulsa. Gene’s 2nd great love was his family. On August 21, 1955, Gene marris the love of his life, the late Olene Marrs. Gene and Olene were married 63 years when she passed away 2 years ago. They had 3 children, Steve, Cindy, and Mickey. Steve and his wife Susan currently live in Longview Texas where he retired after coaching high school football and baseball for 30 years. Cindy tragically passed away several years ago. Mickey resides in Bixby, Oklahoma, where he is currently the owner of Marrs Electric. They were blessed with 6 wonderful grandchildren who were the joys of their lives. Keith, Josh, Zach, Shelby, Mackie, and Michael all loved to spend time with Nana and Papa. They also have 5 great grandchildren. The love and life lessons that they shared with their family will be remembered forever. Gene’s 3rd great love was his work. He went out on his own in 1978 and started his own business, Marrs Electric Company. He spent the early days working from the dining room table. But he had a vision that through hard work and a commitment to doing excellent work, he could be a success. And boy was he right. Through Gene’s early leadership, Marrs Electric has grown into a multi-million dollar business. Marrs Electric currently has offices in Tulsa, Oklahoma and Springdale, Arkansas. They employ over 180 people and have the reputation of being one of the best electric companies in either state. Even during his last days, Gene was always wanting to now how the company was doing. Gene’s final great love was sports. Gene spent many years coaching youth sports in Tulsa. It was through his teaching many a young man grew to love and appreciate the game of baseball. Gene also coached Junior High Football and was proud of having that opportunity as well. After his kids grew up, Gene became an avid golfer. He spent many years as a member of Cedar Ridge Country Club in Tulsa. You can’t talk about Gene’s love for sports without talking about OU. Gene spent most of his life supporting OU sports, especially football. He loved going to the games and cheering on the Sooners. Gene lived a fantastic, fun-filled life. He now is laughing with his family in Heaven. There is no doubt that there is joy there with the addition of Gene Marrs. Because of the current virus situation, there will be no memorial service at this time. Hopefully later we will be able to have a party to celebrate Gene’s life. That will be a lot of fun. Please drop Steve, Mick, and their kids notes to let them know what Gene might have meant to you. They would appreciate hearing from all who’s life Gene has blessed.

The family of Max Eugene "Gene" Marrs created this Life Tributes page to make it easy to share your memories.

Send flowers to the Marrs family.